Here is the source code for a HTML5 project that implements a machine learning algorithm in the Flappy Bird video game using neural networks and a genetic algorithm. The program teaches a little bird how to flap optimally in order to fly safely through barriers as long as possible.

The complete tutorial with much more details and demo you can find here:
http://www.askforgametask.com/tutorial/machine-learning-algorithm-flappy-bird

Here you can also watch a short video with a simple presentation of the algorithm:
https://www.youtube.com/watch?v=aeWmdojEJf0 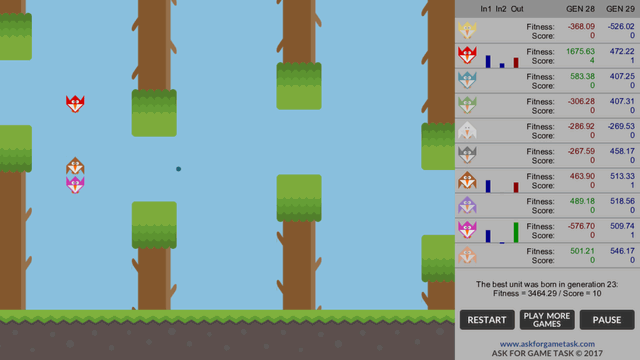 To play the game, each unit (bird) has its own neural network consisted of the next 3 layers: 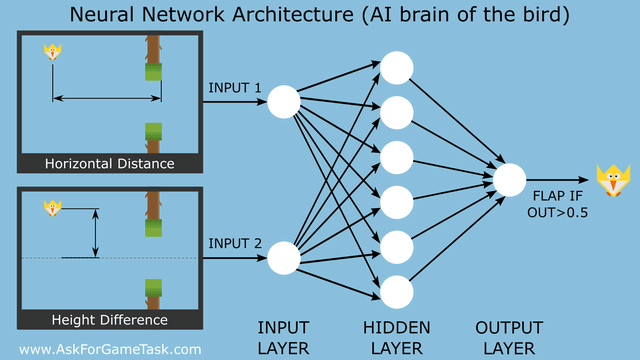 There is used Synaptic Neural Network library to implement entire artificial neural network instead of making a new one from the scratch.

The Main Concept of Machine Learning

The main concept of machine learning implemented in this program is based on the neuro-evolution form. It uses evolutionary algorithms such as a genetic algorithm to train artificial neural networks. Here are the main steps:

Since the program is written in HTML5 using Phaser framework and Synaptic Neural Network library you need these files:

The entire game logic is implemented in gameplay.js file. It consists of the following classes:

The genetic algorithm is implemented in genetic.js file which consists of the following class: