React Render Tracker (RRT) presents component’s tree state over the time and an event log related to a selected component (fiber) or its subtree. It doesn't provide a complete state of the components, but the difference between their states. It's not a replacement for React Devtools, but a compliment to it with a focus on investigation of changes in app's component tree (like mounts, updates and unmounts) and their causes.

The project is at an early stage of development. Lots of things have yet to be added and polished (see roadmap). Feel free to create an issue if you found a bug or have an idea. 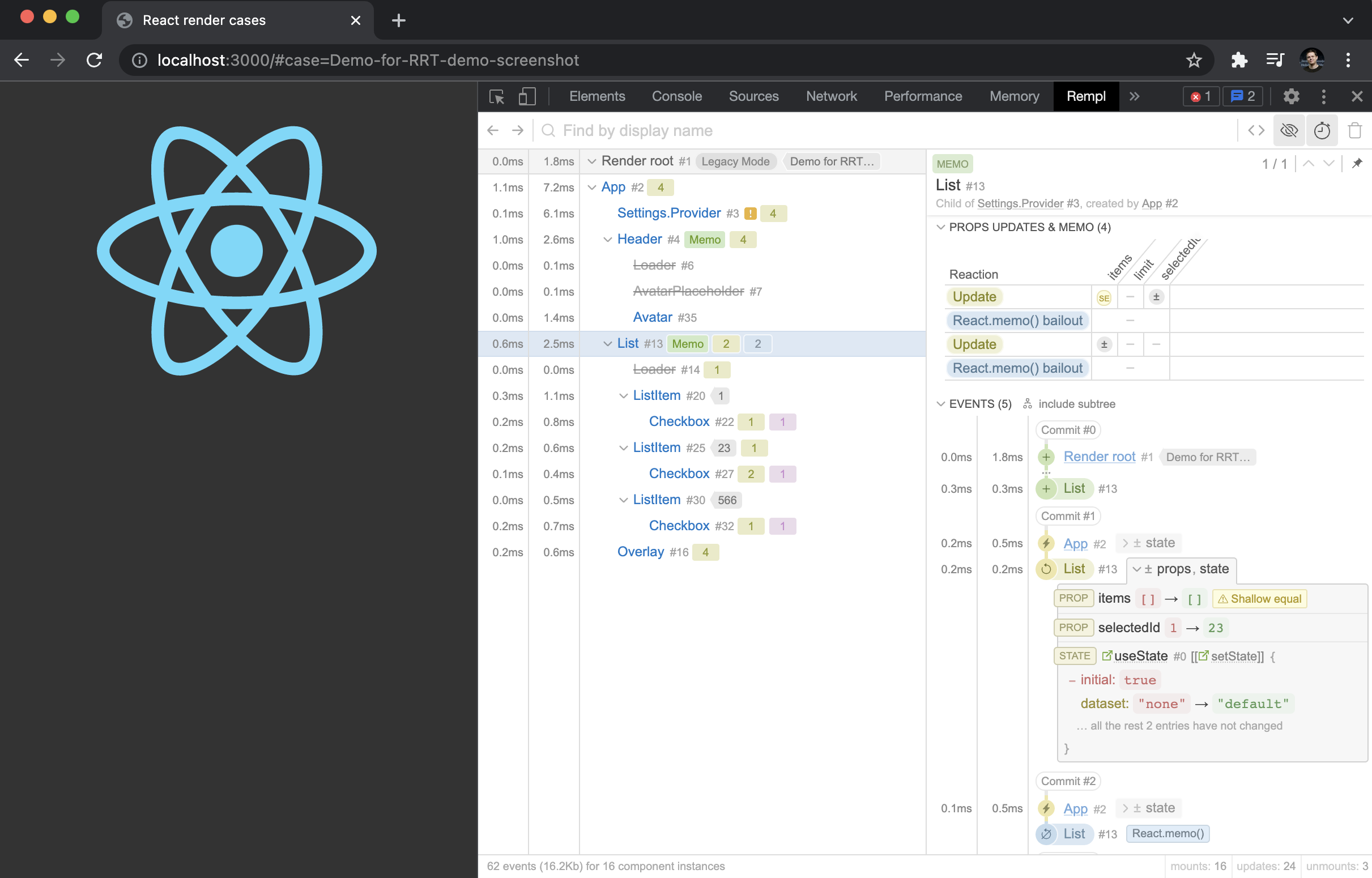 All you need to do is to add a single <script> to the HTML page and open the user interface to inspect your React app.

First of all the <script> should be added before a React app. This script will add a special object to the global which is used by React for providing its internals to the tool for analysis (React Devtools does the same). As soon as React library is loaded and attached to the tool, RRT starts collecting data about what is going on in React's internals.

NOTE: Multiple React library instances are not supported yet. In this case, the behavior of the RRT is unpredictable.

NOTE: A path for a bundle in the NPM package is dist/react-render-tracker.js

You can use a CDN service to include script with no installation from NPM:

Next, you need to open the user interface or use data client API, one of the ways that best suits your case:

To avoid any additional installs you may just add data-config="inpage:true" attribute to the <script>. In this case, the UI will be shown right in the page of your application. That's the simplest way to try React Render Tracker in action. However, UI will perform in the same thread as your React application which may be not a good option from a performance perspective for large scale apps.

Option #2 – Open UI in another tab, or browser, or device

The most universal way for a remote inspection of your React app using React Render Tracker is via a special server as a connection point between the app and React Render Tracker UI. Since RRT is based on Rempl, it works with rempl-cli which is used to launch such kind of a server. In this case, it becomes possible to inspect a React application launched in any web view with a WebSocket support. In fact, you can inspect a React application running in a browser with no devtools support, or Electron, or VS Code, etc.

This will launch a Rempl server on port 8177. Use --port option to specify any other port. See more option with rempl --help command.

NOTE: During MVP phase cross-browser support is not guarantee. Feel free to open an issue if something doesn't work in non-Chromium browser you use.

Option #3 – Data client in a browser

NOTE: Data client API is very basic at the moment and a subject to change. Consider it experimental. Your feedback is highly welcome.

The react-render-tracker/headless-browser-client module provides an adapter for headless browser frameworks which is applied to a page object to get the data client API in the context of the page. Supported frameworks:

React Render Tracker can be configured by the attribute data-config on <script> element:

Opens in-page host for the tool on initialization when true.

Allows to enable "open in editor" feature which is disabled when value is undefined (by default). Option's value should be an object with the following shape (all entries are optional except pattern):

In case your editor is Visual Studio Code, it's possible to setup "open in editor" feature without a web server, like so:

When a string value is passed for openSourceLoc option it's replaced with an object { pattern: stringValue }, i.e.

The pattern's value might contain placeholders for a value substitution:

NOTE: In this case bundle will be rebuild on each request for the script. This version of bundle contains source maps which is good for debugging

NOTE: This version of bundle is the same as for publishing (minified and no source maps included)

How to start playground locally

Open a URL that will displayed in a console (e.g. Server listen on http://localhost:3000).

The prototype of React Render Tracker was crafted during the Microsoft's hackathon on July 2021. Thanks to the team working on it: Dana Janoskova (@DJanoskova), Dmitrii Samsonov (@user1736), Yury Tomilin (@r04423), Maksym Kharchenko (@Bon4ik) and Raluca Vasiliu (@kubayaya).

Thanks to React Devtools authors which integration with React internals became a basis for integration implementation in React Render Tracker.