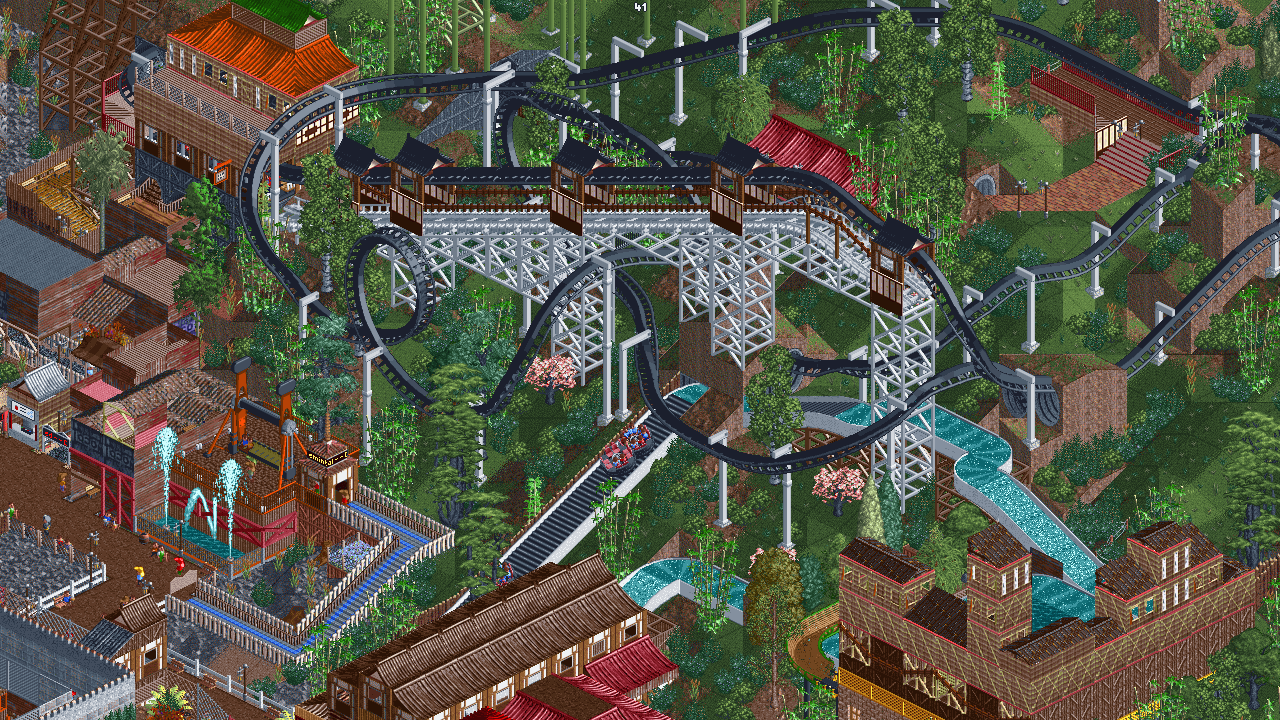 Chat takes place on Discord. You will need to create a Discord account if you don't yet have one.

If you want to help make the game, join the developer channel.

If you need help, want to talk to the developers, or just want to stay up to date then join the non-developer channel for your language.

If you want to help translate the game to your language, please stop by the Localisation channel.

OpenRCT2 is an open-source re-implementation of RollerCoaster Tycoon 2 (RCT2). The gameplay revolves around building and maintaining an amusement park containing attractions, shops and facilities. The player must try to make a profit and maintain a good park reputation whilst keeping the guests happy. OpenRCT2 allows for both scenario and sandbox play. Scenarios require the player to complete a certain objective in a set time limit whilst sandbox allows the player to build a more flexible park with optionally no restrictions or finance.

RollerCoaster Tycoon 2 was originally written by Chris Sawyer in x86 assembly and is the sequel to RollerCoaster Tycoon. The engine was based on Transport Tycoon, an older game which also has an equivalent open-source project, OpenTTD. OpenRCT2 attempts to provide everything from RCT2 as well as many improvements and additional features, some of these include support for modern platforms, an improved interface, improved guest and staff AI, more editing tools, increased limits, and cooperative multiplayer. It also re-introduces mechanics from RollerCoaster Tycoon that were not present in RollerCoaster Tycoon 2. Some of those include; mountain tool in-game, the "have fun" objective, launched coasters (not passing-through the station) and several buttons on the toolbar.

OpenRCT2.org offers precompiled builds and installers of the latest master and the develop branch. There is also a cross platform Launcher available that will automatically update your build of the game so that you always have the latest version.

Some Linux distributions offer native packages already. These packages are usually third-party, but we're trying to resolve issues they are facing.

Some *BSD operating systems offer native packages. These packages are usually third-party, but we're trying to resolve issues they are facing.

OpenRCT2 requires original files of RollerCoaster Tycoon 2 to play. It can be bought at either Steam or GOG.com.

A list of bugs can be found on the issue tracker. Feel free to work on any bug and submit a pull request to the develop branch with the fix. Mentioning that you intend to fix a bug on the issue will prevent other people from trying as well.

Please talk to the OpenRCT2 team first before starting to develop a new feature. We may already have plans for or reasons against something that you'd like to work on. Therefore contacting us will allow us to help you or prevent you from wasting any time. You can talk to us via Discord, see links at the top of this page.

You can translate the game into other languages by editing the language files in data/language directory. Please join discussions in the #localisation channel on Discord and submit pull requests to OpenRCT2/Localisation.

You can help create new graphics for the game by visiting the OpenGraphics project. 3D modellers needed!

You can help create the music and sound effects for the game. Check out the OpenMusic repository and drop by our #open-sound-and-music channel on Discord to find out more.

We would also like to distribute additional scenarios with the game, when the time comes. For that, we need talented scenario makers! Check out the OpenScenarios repository.

OpenRCT2 is licensed under the GNU General Public License version 3.

Companies that kindly allow us to use their stuff: