Warning: this research was done in late 2015 with slight modifications in early 2016. Many toolkits have improved significantly since then.

Abstract. In this study, I evaluate some popular deep learning toolkits. The candidates are listed in alphabetical order: Caffe, CNTK, TensorFlow, Theano, and Torch.

I also provide ratings in some areas because for a lot of people, ratings are useful. However, keep in mind that ratings are inherently subjective [1].

If you find something wrong or inadequate, please help improve by filing an issue.

In this section, we evaluate each toolkit's ability to train common and state-of-the-art networks without writing too much code. Some of these networks are:

In addition, we also evaluate the flexibility to create a new type of model.

Caffe is perhaps the first mainstream industry-grade deep learning toolkit, started in late 2013, due to its excellent convnet implementation (at the time). It is still the most popular toolkit within the computer vision community, with many extensions being actively added.

However, its support for recurrent networks and language modeling in general is poor, due to its legacy architecture, which's limitations are detailed in the architecture section.

In CNTK (as in TensorFlow and Theano), a network is specified as a symbolic graph of vector operations, such as matrix add/multiply or convolution. A layer is just a composition of those operations. The fine granularity of the building blocks (operations) allows users to invent new complex layer types without implementing them in a low-level language (as in Caffe).

New models Since TF uses symbolic graph of vector operations approach, specifying a new network is fairly easy. Although it doesn't support symbolic loop yet (at least not well tested/documented, as of 05/2016), RNNs can be made easy and efficient using the bucketing trick.

However, TF has a major weakness in terms of modeling flexibility. Every computational flow has be constructed as a static graph. That makes some computations difficult, such as beam search (which is used frequently in sequence prediction tasks).

State-of-the-art models. Theano has implementation for most state-of-the-art networks, either in the form of a higher-level framework (e.g. Blocks, Keras, etc.) or in pure Theano.

New models. In Torch, there are multiple ways (stack of layers or graph of layers) to define a network but essentially, a network is defined as a graph of layers. Because of this coarser granularity, Torch is sometimes considered less flexible because for new layer types, users have to implement the full forward, backward, and gradient input update.

However, unlike Caffe, defining a new layer in Torch is much easier because you don't have to program in C++. Plus, in Torch, the difference between new layer definition and network definition is minimal. In Caffe, layers are defined in C++ while networks are defined via Protobuf.

Torch is more flexible than TensorFlow and Theano in that it is imperative while TF/Theano are declarative (i.e. one has to declare a computational graph). That makes some operations, e.g. beam search, much easier to do in Torch. 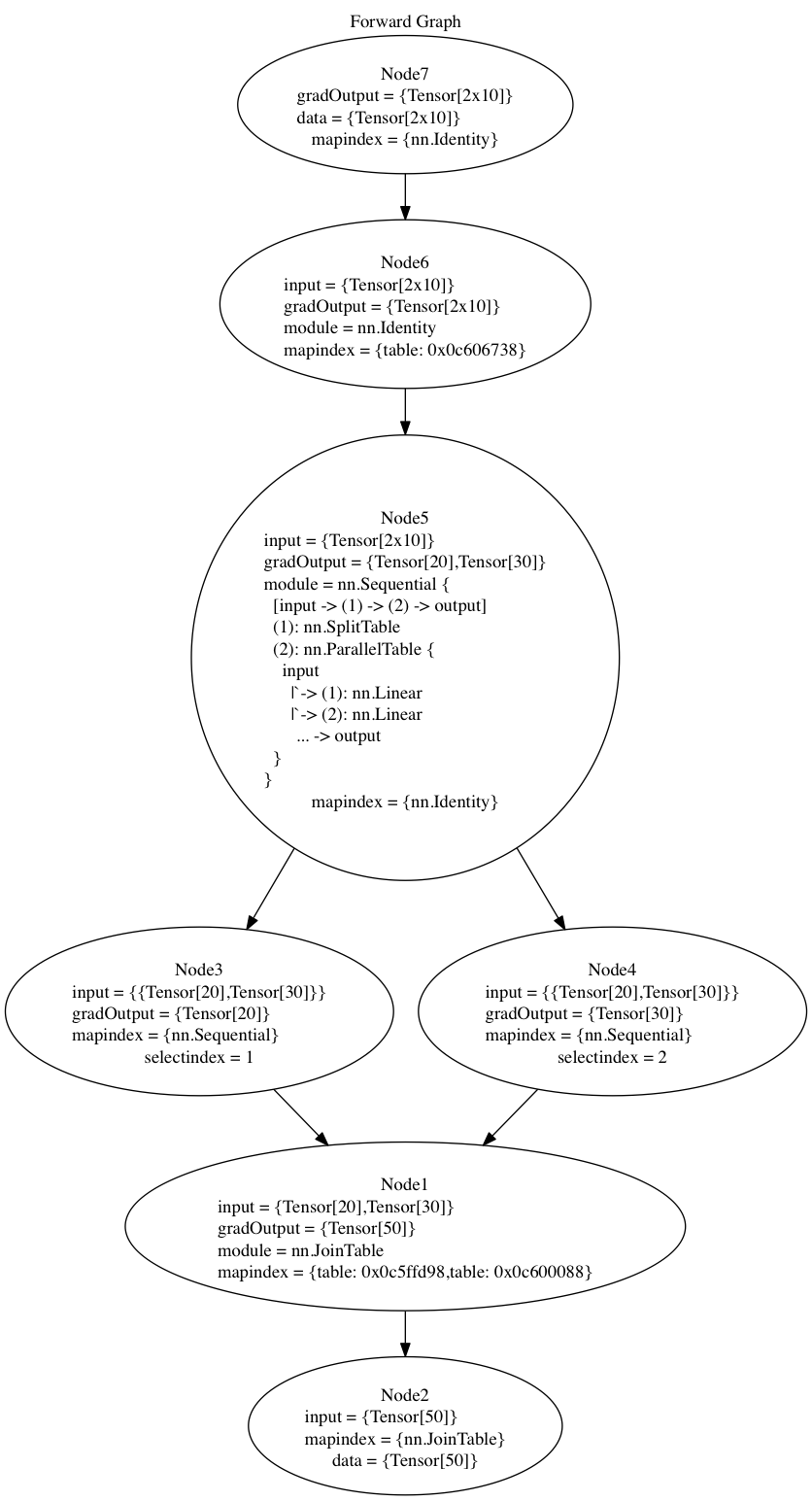 Caffe has pycaffe interface but that's a mere secondary alternative to the command line interface. The model has to be defined in protobuf (usually with a plain text editor), even if you use pycaffe.

The way to use CNTK, similar to Caffe, is to specify a config file and run command line. CNTK has Python support since V2.0 and C# support in progress.

TF supports two interfaces: Python and C++. This means that you can do experiments in a rich, high-level environment and deploy your model in an environment that requires native code or low latency.

It would be perfect if TF supports F# or TypeScript. The lack of static type in Python is just ... painful :).

Torch runs on LuaJIT, which is amazingly fast (comparable with industrial languages such as C++/C#/Java). Hence developers don't have to think about symbolic programming, which can be limited. They can just write all kinds of computations without worrying about performance penalty.

However, let's face it, Lua is not yet a mainstream language.

How easy to deploy a new model?

Caffe is C++ based, which can be compiled on a variety of devices. It is cross-platform (windows port is available and maintained here). Which makes Caffe the best choice with respect deployment.

Like Caffe, CNTK is also C++ based and is cross-platform. Hence, deployment should be easy in most cases. However, to my understanding, it doesn't work on ARM architecture, which limits its its capability on mobile devices.

TF supports C++ interface and the library can be compiled/optimized on ARM architectures because it uses Eigen (instead of a BLAS library). This means that you can deploy your trained models on a variety of devices (servers or mobile devices) without having to implement a separate model decoder or load Python/LuaJIT interpreter [3].

TF doesn't work on Windows yet so TF models can't be deployed on Windows devices though.

The lack of low-level interface and the inefficiency of Python interpreter makes Theano less attractive for industrial users. For a large model, the overhead of Python isn’t too bad but the dogma is still there.

The cross-platform nature (mentioned below) enables a Theano model to be deployed in a Windows environment. Which helps it gain some points.

Torch require LuaJIT to run models. This makes it less attractive than bare bone C++ support of Caffe/CNTK/TF. It’s not just the performance overhead, which is minimal. The bigger problem is integration, at API level, with a larger production pipeline.

All of these toolkits call cuDNN so as long as there’s no major computations or memory allocations at the outer level, they should perform similarly.

[email protected] has done some benchmarking for ConvNets. Deep Learning is not just about feedforward convnets, not just about ImageNet, and certainly not just about a few passes over the network. However, Soumith’s benchmark is the only notable one as of today. So we will base the Single-GPU performance rating based on his benchmark.

TensorFlow used to be slow when it first came out but as of 05/2016, it has reached the ballpark of other frameworks in terms of ConvNet speed. This is not surprising because every framework nowadays calls CuDNN for the actual computations.

Here's my latest micro benchmark of TensorFlow 0.8 vs before. The measurement is latency, in milliseconds, for one full minibatch forward-backward pass on a single Titan X GPU.

On big networks, Theano’s performance is on par with Torch7, according to this benchmark. The main issue of Theano is startup time, which is terrible, because Theano has to compile C/CUDA code to binary. We don’t always train big models. In fact, DL researchers often spend more time debugging than training big models. TensorFlow doesn’t have this problem. It simply maps the symbolic tensor operations to the already-compiled corresponding function calls.

Even import theano takes time because this import apparently does a lot of stuffs. Also, after import Theano, you are stuck with a pre-configured device (e.g. GPU0).

Caffe's architecture was considered excellent when it was born but in the modern standard, it is considered average. The main pain points of Caffe are its layer-wise design in C++ and the protobuf interface for model definition.

Layer-wise design. The building block of a network in Caffe is layer.

Protobuf. Caffe has pycaffe interface but that's a mere replacement of the command line interface. The model has to be defined in protobuf (usually with a plain text editor), even if you use pycaffe.

[Copied from my own answer on Quora]

TF has a clean, modular architecture with multiple frontends and execution platforms. Details are in the white paper.

The architecture is fairly hacky: the whole code base is Python where C/CUDA code is packaged as Python string. This makes it hard to navigate, debug, refactor, and hence contribute as developers.

Caffe, CNTK, TensorFlow and Theano work on all OSes. Torch does not work on Windows and there's no known plan to port from either camp.

[1] Note that I don’t aggregate ratings because different users/developers have different priorities.

[3] See my blog post for why this is desirable.