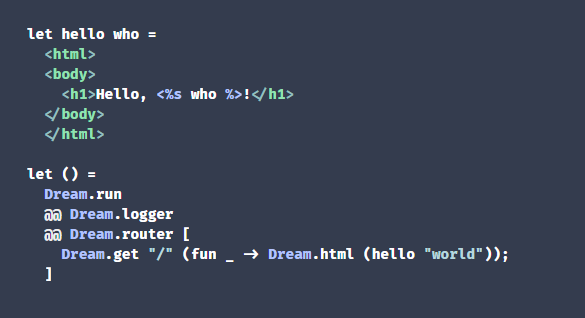 Dream is one flat module in one package, documented on one page, but with many examples. It offers:


...all without sacrificing ease of use — Dream has:


Every part of the API is arranged to be easy to understand, use, and remember. Dream sticks to base OCaml types like string and list, introducing only a few types of its own — and some of those are just abbreviations for bare functions!

The neat interface is not a limitation. Everything is still configurable by a large number of optional arguments, and very loose coupling. Where necessary, Dream exposes the lower-level machinery that it is composed from. For example, the basic body and WebSocket readers return strings, but you can also do zero-copy streaming.

You can even run Dream as a quite bare abstraction over its underlying set of HTTP libraries, where it acts only as minimal glue code between their slightly different interfaces.

And, even though Dream is presented as one package for ordinary usage, it is internally factored into several sub-libraries, according to the different dependencies of each, for fast porting to different environments.

Dream is a low-level and unopinionated framework, and you can swap out its conveniences. For example, you can use TyXML with server-side JSX instead of Dream's built-in templates. You can bundle assets into a single Dream binary, or use Dream in a subcommand. Dream tries to be as functional as possible, touching global runtime state only lazily, when called into.

Visit one of the first tutorials in the online playground, and read its docs. You can get and build it locally with:

Most of the other examples are also loaded in the playground. See the links on its home page.

Visit any of the examples, such as 2-middleware, and re-create the files locally. The file esy.json shows how to depend on Dream. All of the examples are installed by running npx esy, and started with npx esy start.

After that, go to any of the examples, such as 2-middleware, re-create the files locally, and run it:

Apart from the issues, good places to discuss Dream are...

All kinds of contributions are welcome, including examples, links to blogs, related libraries, and, of course, PRs! See CONTRIBUTING.md.

As an immediate note, if you'd like to clone the repo, be sure to use --recursive, because Dream uses several git submodules:

Dream is based on work by the authors and contributors of its many dependencies and their transitive dependencies. There are, however, several influences that cannot be discovered directly: