An HTTP router and reverse proxy for service composition, including use cases like Kubernetes Ingress 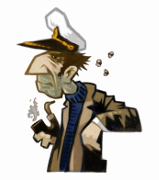 Skipper is an HTTP router and reverse proxy for service composition. It's designed to handle >300k HTTP route definitions with detailed lookup conditions, and flexible augmentation of the request flow with filters. It can be used out of the box or extended with custom lookup, filter logic and configuration sources.

An overview of deployments and data-clients shows some use cases to run skipper.

Skipper provides a default executable command with a few built-in filters. However, its primary use case is to be extended with custom filters, predicates or data sources. Go here for additional documentation.

A few examples for extending Skipper:

In order to build and run Skipper, only the latest version of Go needs to be installed. Skipper can use Innkeeper or Etcd as data sources for routes, or for the simplest cases, a local configuration file. See more details in the documentation: https://pkg.go.dev/github.com/zalando/skipper

Example, assumes that you have $GOBIN set to a directory that exists and is in your $PATH:

Create a file with a route:

To run the latest Docker container:

To run eskip you first mount the .eskip file, into the container, and run the command

To run skipper you first mount the .eskip file, into the container, expose the ports and run the command

Skipper will then be available on http://localhost:9090

Skipper can be used as an authentication proxy, to check incoming requests with Basic auth or an OAuth2 provider including audit logging. See the documentation at: https://pkg.go.dev/github.com/zalando/skipper/filters/auth.

Working with the code

Getting the code with the test dependencies (-t switch):

Build and test all packages:

On Mac the tests may fail because of low max open file limit. Please make sure you have correct limits setup by following these instructions.

To run or debug skipper from IntelliJ IDEA or GoLand, you need to create this configuration:

Skipper can be used to run as an Kubernetes Ingress controller. Details with examples of Skipper's capabilities and an overview you will can be found in our ingress-controller deployment docs.

The following example shows a skipper routes file in eskip format, that has 3 named routes: baidu, google and yandex.

Run skipper with the routes file doc-1min-intro.eskip shown above

To test each route you can use curl:

To see the request that is made by the tee() filter you can use nc:

This introduction was moved to ingress controller documentation.

For More details, please check out our Kubernetes ingress controller docs, our ingress usage and how to handle common backend problems in Kubernetes.

You should have a base understanding of Kubernetes and Ingress.

Skipper uses Go modules, so you might need to add GO111MODULE=on in your custom build process.

In case you want to implement and link your own modules into your skipper, there is https://github.com/skipper-plugins organization to enable you to do so. In order to explain you the build process with custom Go modules there is https://github.com/skipper-plugins/skipper-tracing-build, that was used to build skipper's opentracing package. We moved the opentracing plugin source into the tracing package.

We also have a slack channel #skipper in gophers.slack.com. Get an invite. If for some reason this link doesn't work, you can find more information about the gophers communities here.

We do our proposals open in Skipper's Google drive. If you want to make a proposal feel free to create an issue and if it is a bigger change we will invite you to a document, such that we can work together.

Zalando uses this project as shop frontend http router with 350000 routes, as Kubernetes ingress controller and runs several custom skipper instances that use skipper as library.

We also ran tests with several ingress controllers and skipper gave us the more reliable results. Currently we are running skipper since almost 2 years with like 20K Ingress rules. The fact that skipper is written in go let us understand the code, add features and fix bugs since all of our infra stack is golang.