A monocular pose estimation system based on infrared LEDs

The RPG Monocular Pose Estimator is recommended to be used with ROS-Kinetic and Ubuntu 16.04. This is research code, expect that it changes often (or not at all) and any fitness for a particular purpose is disclaimed.

The source code is released under a GPL licence. Please contact the authors for a commercial license.

The RPG Monocular Pose Estimator uses infrared LEDs mounted on a target object and a camera with an infrared-pass filter to estimate the pose of an object.

If you use this work in an academic context, please cite the following ICRA 2014 publication: 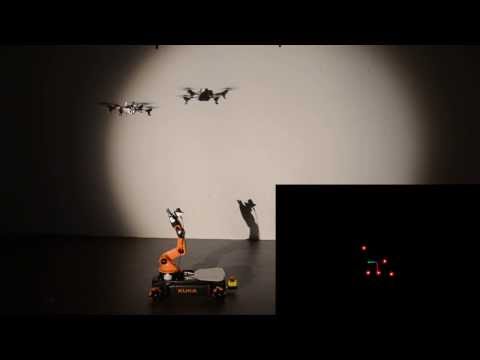 Installation of the package

The RPG Monocular Pose Estimator is built on the Robotic Operating System (ROS). In order to install the package, ROS has to be installed.

Additionally, the RPG Monocular Pose Estimator makes use of OpenCV for image processing and the Eigen linear algebra library. These should come preinstalled with ROS, however, if the dependency is missing they can be installed from their respective websites:

In order to install the RPG Monocular Pose Estimator and its dependencies, first install vcstool:

Then clone the latest version from our GitHub repository into your catkin workspace, get the dependencies with the vcstool and compile the packages using ROS.:

Source your catkin workspace after this.

The RPG Monocular Pose Estimator makes use of Doxygen to produce its documentation. Please ensure that you have the latest version of Doxygen which can be installed with:

The Doxygen configuration file is located in the doxygen_documentation folder within the RPG Monocular Pose Estimator directory.

Change to the doxygen_documentation directory:

To produce the documentation, run Doxygen on the configuration file:

Open the index.html file in html directory that has been produced.

In order to test the installation on a data set, download the data set from here, and follow these instructions.

The program makes use of a number of parameters to estimate the pose of the tracked object. These include the location of the LEDs on the object, the intrinsic parameters of the camera, and various runtime prameters, such as thresholding values.

In order to predict the pose of the target object, the RPG Monocular Pose Estimator needs to know the positions of the LEDs on the object in the object's frame of reference. These positions are given to the program using a YAML file located within the roscd monocular_pose_estimator/marker_positions folder.

By default, the file is called marker_positions.YAML and has the following format.

Note that each new LED position is indicated by a dash (-). The position is given in the x, y, and z coordinates of the object frame in metres.

If you would like to use your own marker positions file, place it in the monocular_pose_tracker/marker_positions folder and alter the launch file as explained below in the section 'Launch Files'.

Running the RPG Monocular Pose Estimator with a USB Camera

Ensure that you have a working USB camera.

The camera needs to be calibrated. Follow the instructions at http://www.ros.org/wiki/camera_calibration/Tutorials/MonocularCalibration.

The camera should be adjusted so that the gain and shutter/exposure time of the camera are fixed. (Use 'rqt_reconfigure' to adjust the camera parameters while the camera is running). Ideally, the LEDs should appear very bright in the image so that they can easily be segmented from the surrounding scene by simple thresholding. See 'Parameter Settings' below on how to change the thresholding value.

The RPG Monocular Pose Estimator requires the LED positions on the target object. These are entered in a YAML file and are loaded at runtime. See 'Setting up the Marker Positions Parameter File' above for more details.

The RPG Monocular Pose Estimator subscribes to the following topics:

The following parameters can be set dynamically during runtime. (Use 'rqt_reconfigure' to adjust the parameters).

The RPG Monocular Pose Estimator needs to be launched with a launch file, since the location of the YAML configuration file containing the LED positions on the object needs to be specified. (See 'Setting up the Marker Positions Parameter File' above for further details). An example launch file is presented below.

The name of the YAML configuration file may be specified directly as the default value of the argument YAML_file_name, or may be passed to the system via the command line on launch, e.g. roslaunch monocular_pose_estimator launch_file_name.launch YAML_file_name:=<file_name>, where <file_name> is replaced with the name of the maker positions YAML file.

For more information on how to use ROS launch files, see the ROS website.

The RPG Monocular Pose Estimator makes use of infrared LEDs mounted on the target object and a camera fitted with an infrared-pass filter. The details of the LEDs and camera that were used in our evaluation of the package are outlined below. Our system will be able to work with any kind of LEDs and camera, provided that the LEDs appear bright in the image and can consequently be segmented from the image using simple thresholding operations. Also the emission pattern of the LEDs should be as wide as possible, so that they still appear bright in the image even when viewed from shallow viewing angles.

The placement of the LEDs on the target object can be arbitrary, but must be non-symmetric. The LEDs should also not lie in a plane in order to reduce the ambiguities of the pose estimation. Also the larger the volume that the LEDs fill, the more accurate the estimated pose will be. The robustness and accuracy are improved if the LEDs are visible from many view points. The RPG Monocular Pose Estimator requires a minimum of four (4) LEDs mounted and visible on the target object in order for its pose to be resolved.

The camera used was a MatrixVision mvBlueFOX-MLC200w monochrome camera fitted with an infrared-pass filter. Its resolution is 752x480 pixels.