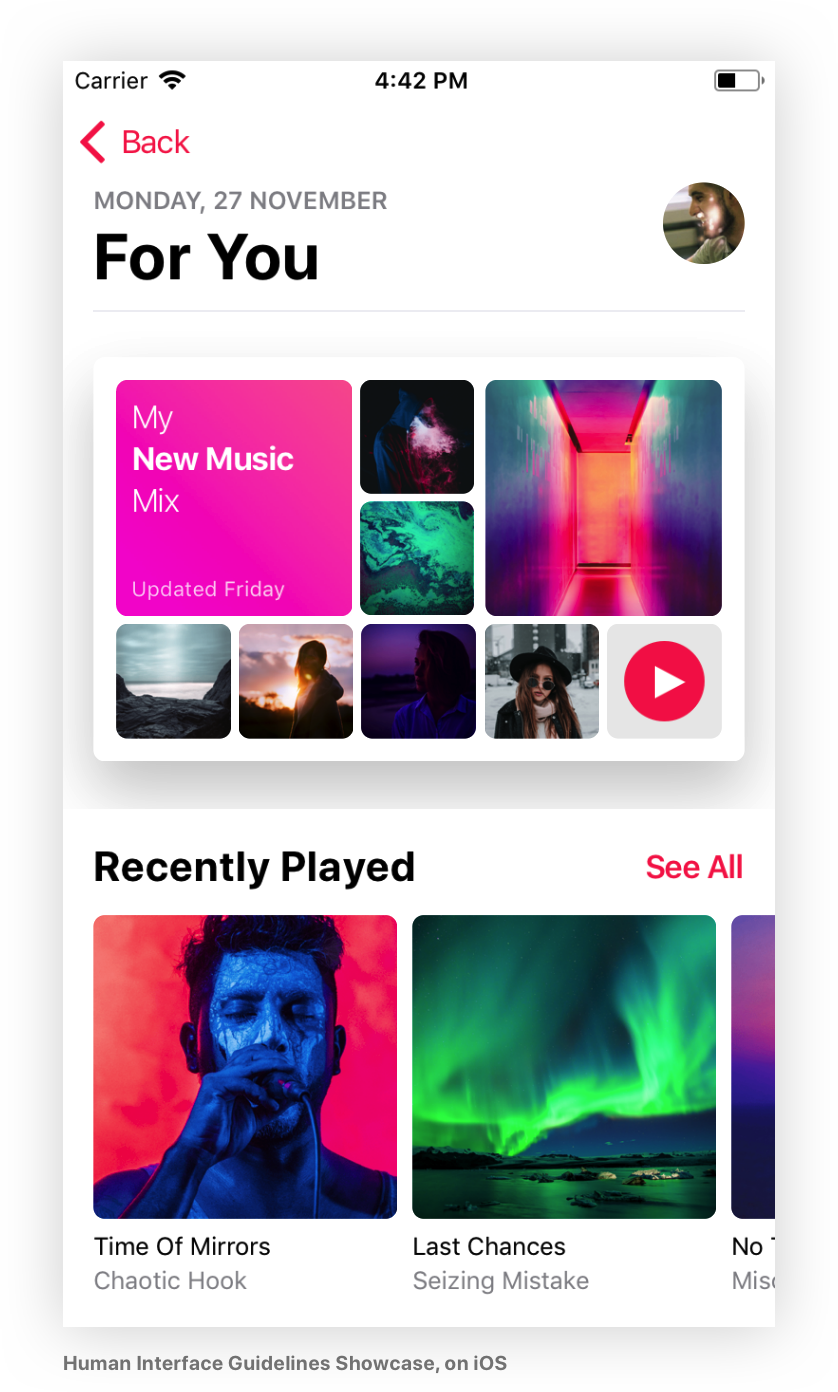 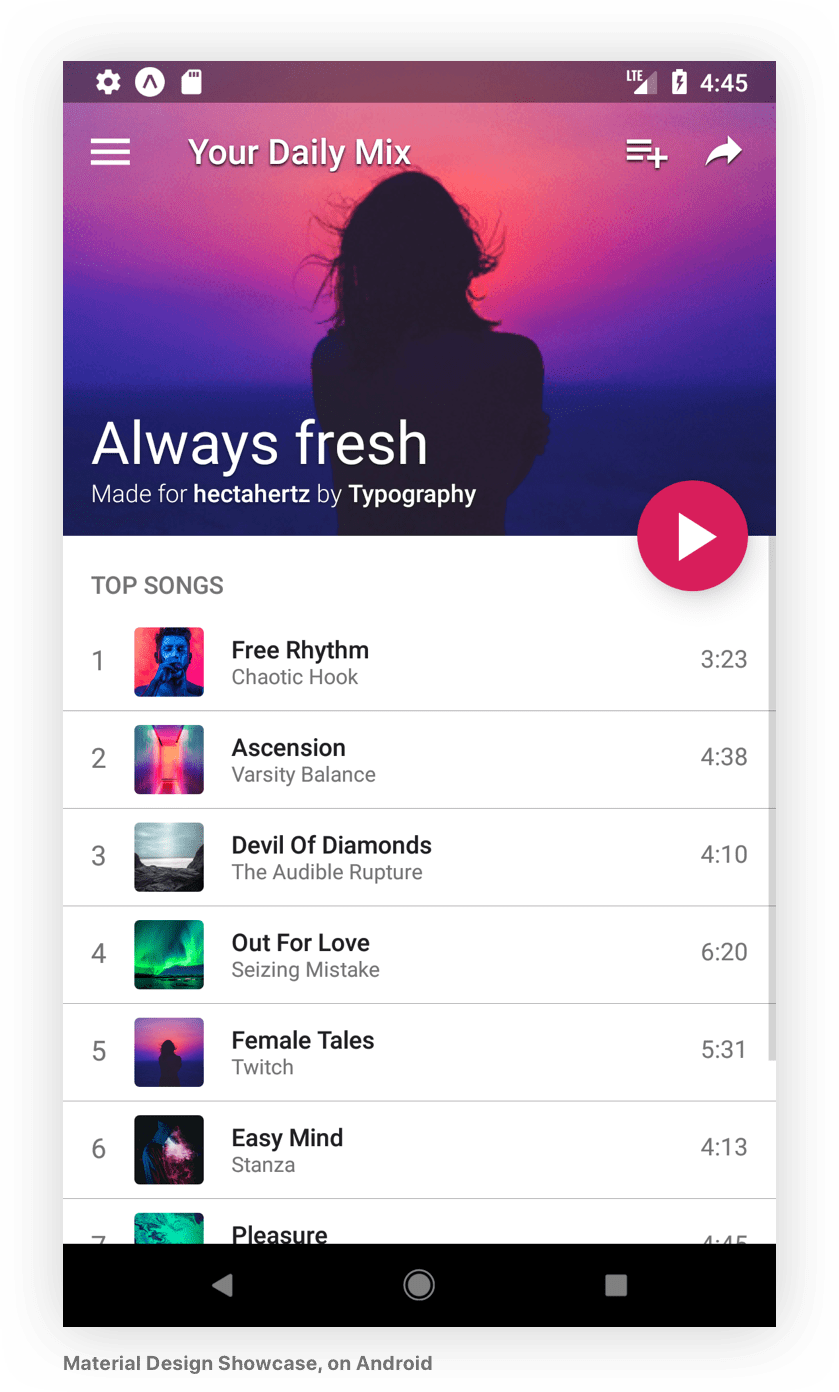 Creating great Text Styles in React Native is not a simple task, it requires a lot of fiddling and handling edge cases.

This library provides a good set of defaults and helpers that cover the majority of the cases you'll need, make your code much simpler and ✨bonus✨ render great on iOS, Android and the web 😄

Set a style in your component:

We provide a series of predefined collections for you to start with that match the native design systems for iOS and Android.

You can use them directly wherever you would supply a textStyle.

There's also the option of extending them to create your own styles.

Includes all the styles defined in the Material Design Guidelines. Defines size, weight and color. 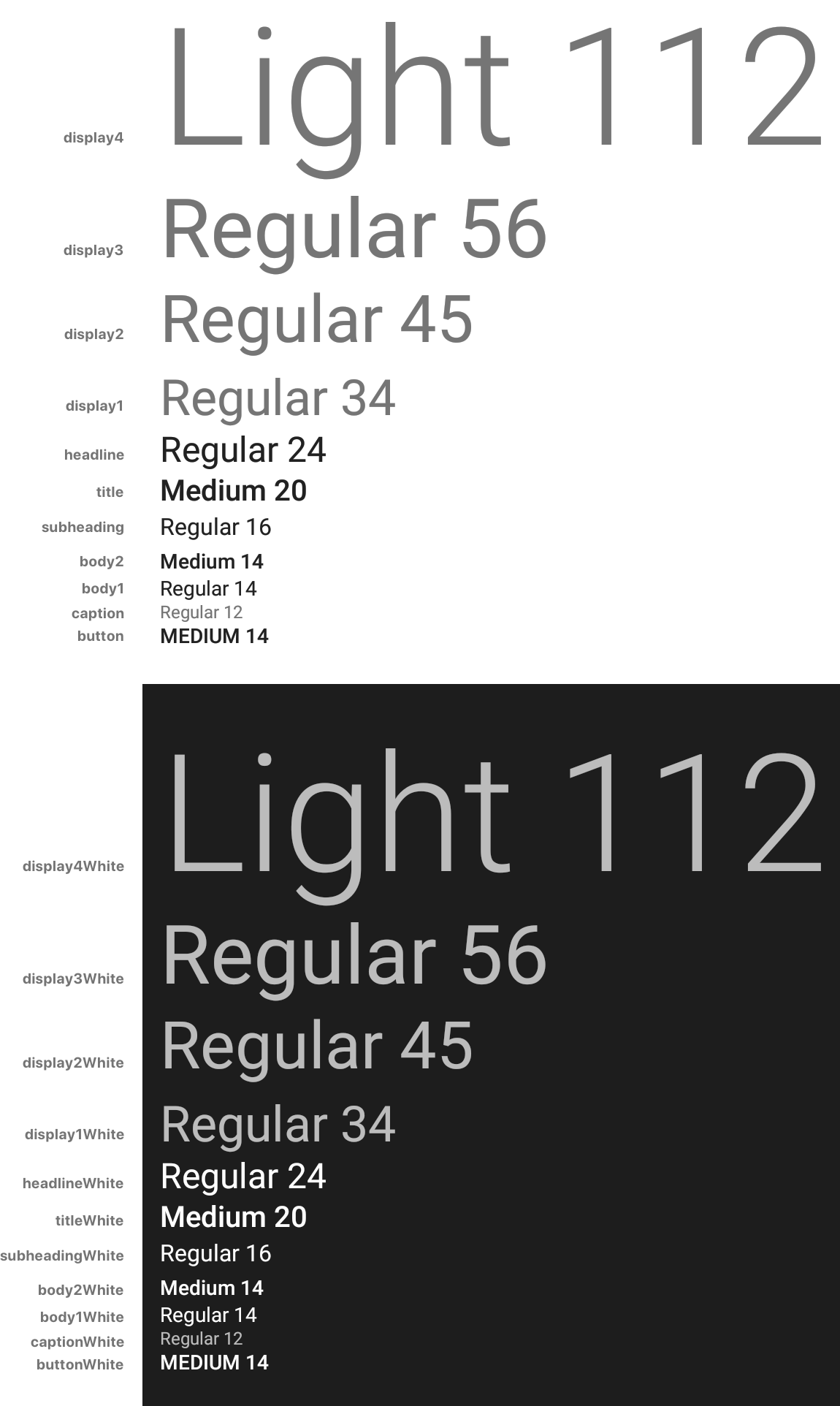 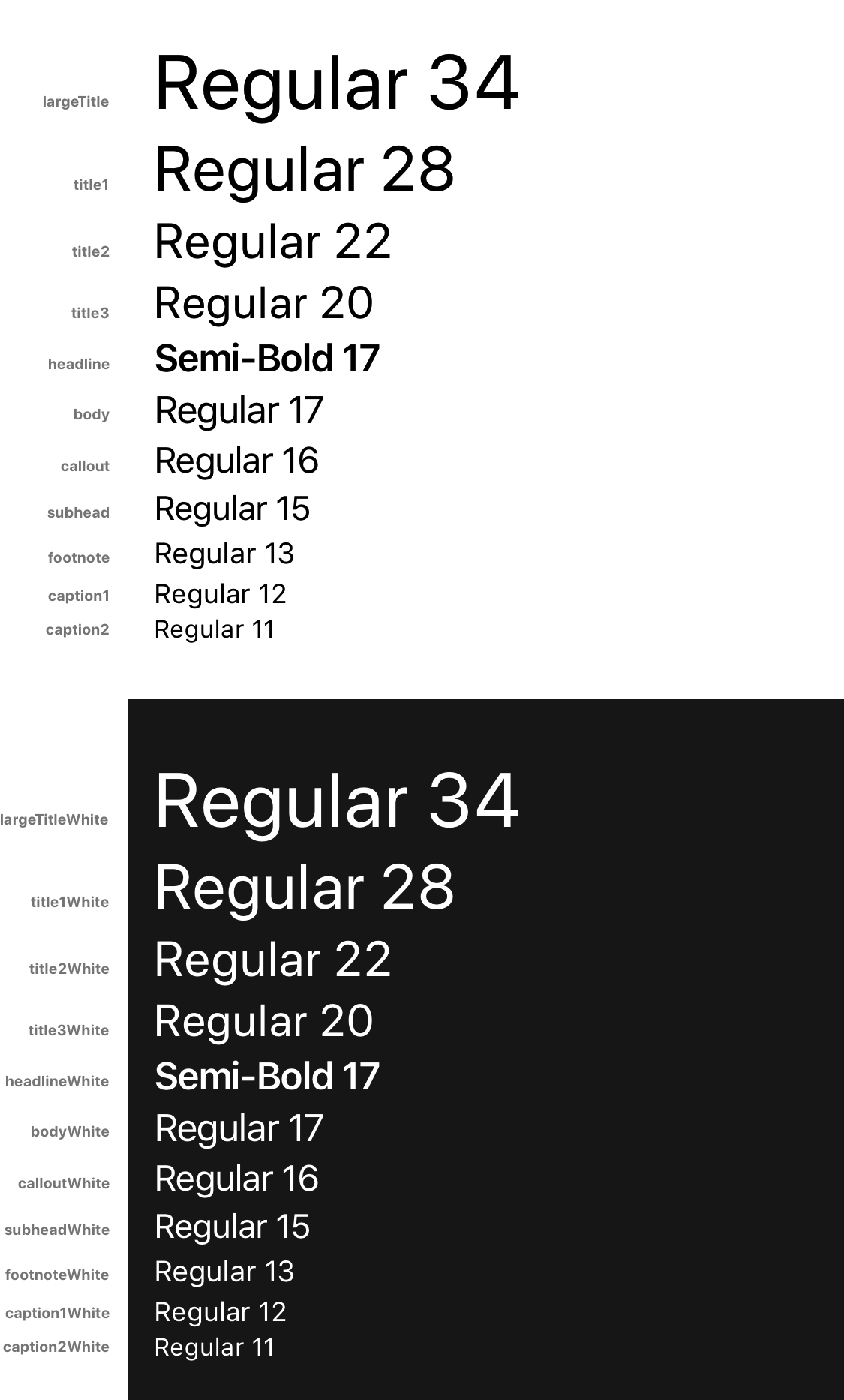 These are the text styles that fall under the category of iOS UIKit, and are used to build the UI components of iOS Apps.

They build on top of the Human Interface styles, customizing some properties such as weight or letter spacing. 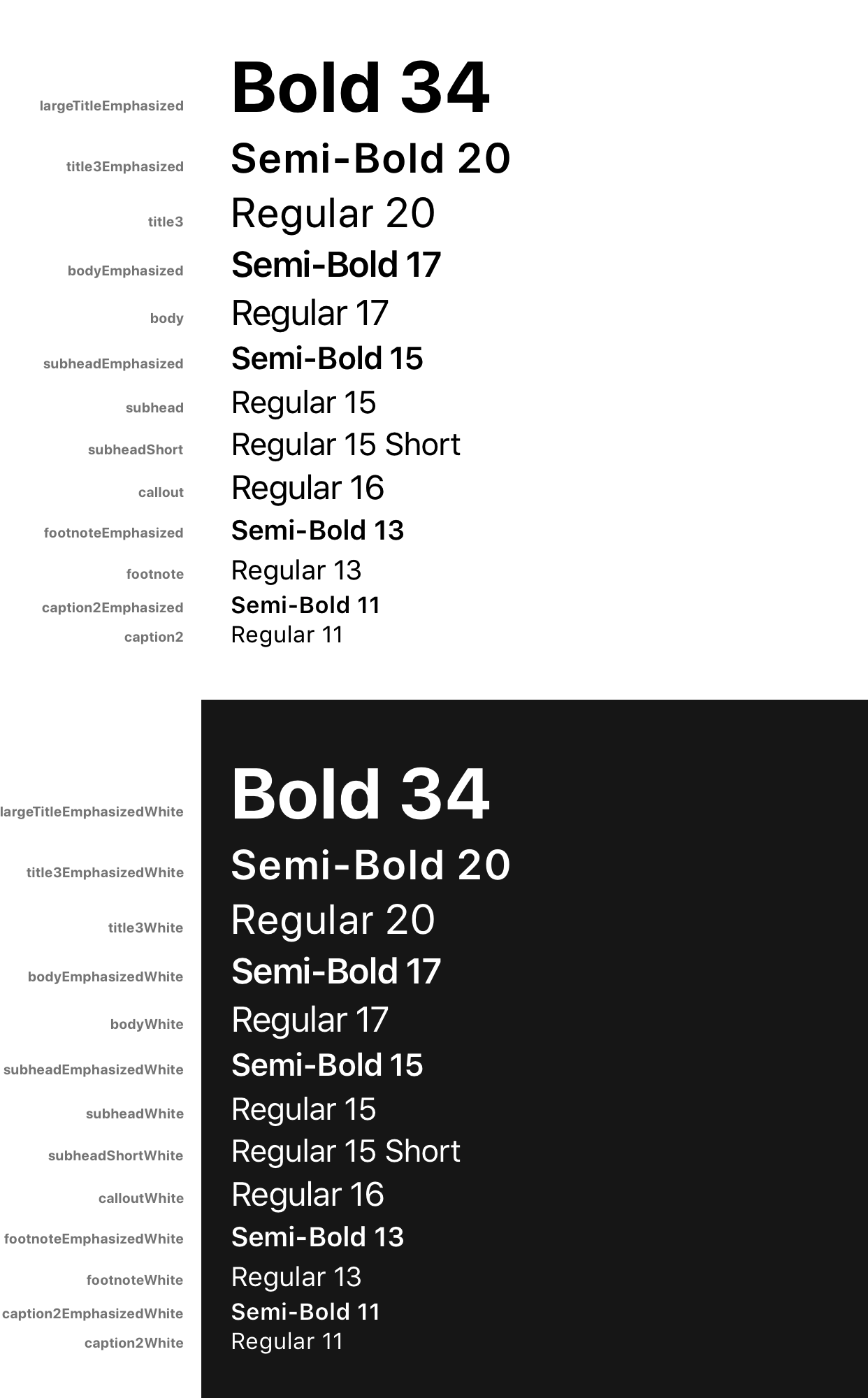 The collections provide every style in 2 different ways:

The basic way to use them is to set the StyleSheet directly where you would supply a textStyle:

To extend the styles, you can spread the object inside your own StyleSheet and override some of its attributes:

Another option would be to combine the provided StyleSheet with your own StyleSheet.

A font weight in React Native is sometimes formed by a pair of a fontFamily and a fontWeight, but not always! It depends on the typeface, sometimes it's just defined by the fontFamily.

With these helpers, you don't have to worry about those inconsistencies.

To combine them with a collection style (or your own styles) just spread them, as they are plain objects.

The System weights render visually similar weights of the Native typefaces on each platform. Read more about cross-platform here.

This is the recommended way of customizing your weights unless you really need different visual styles for each platform.

They follow the San Francisco naming convention, as it has more steps, which makes it more future–proof. 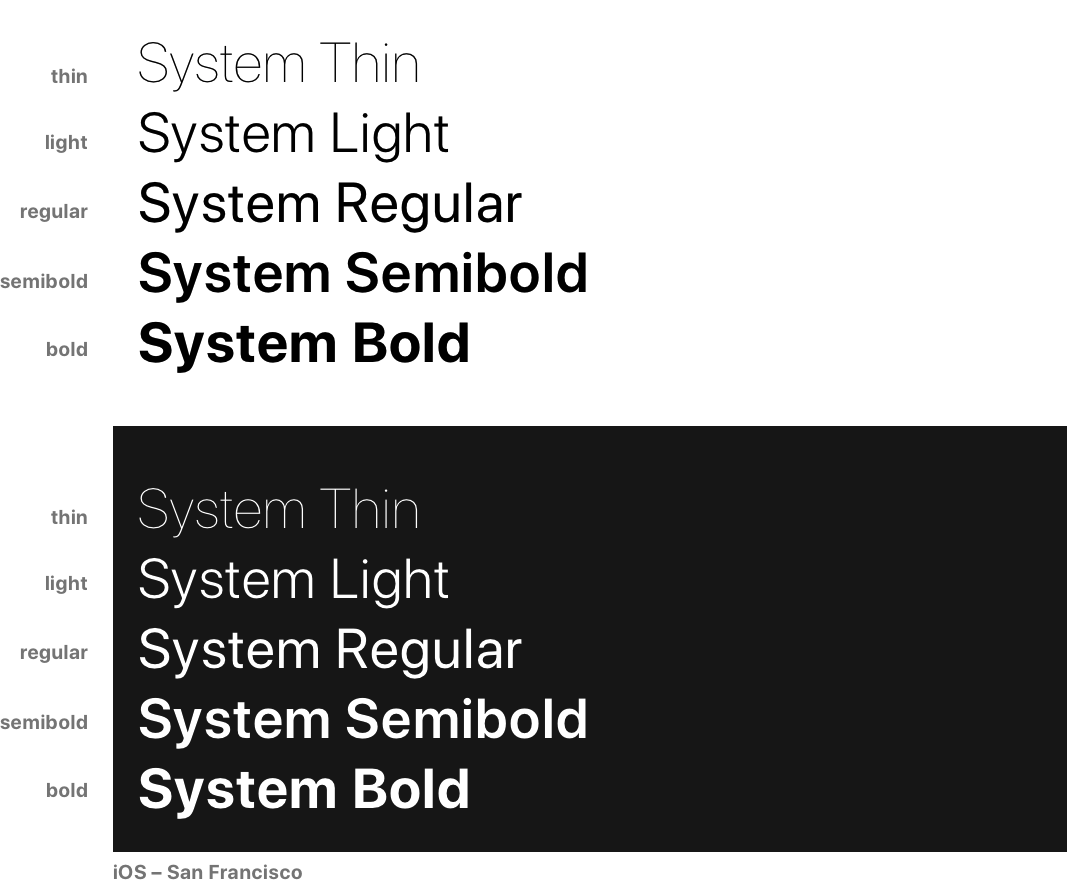 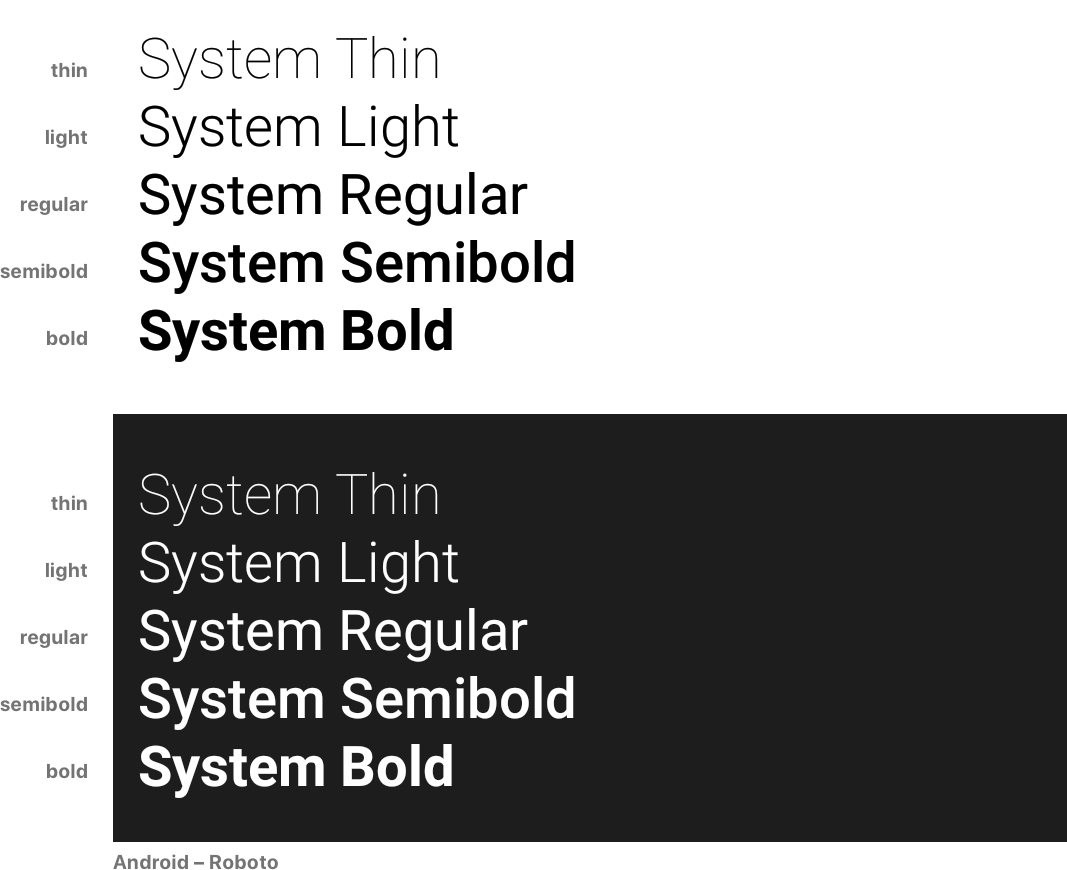 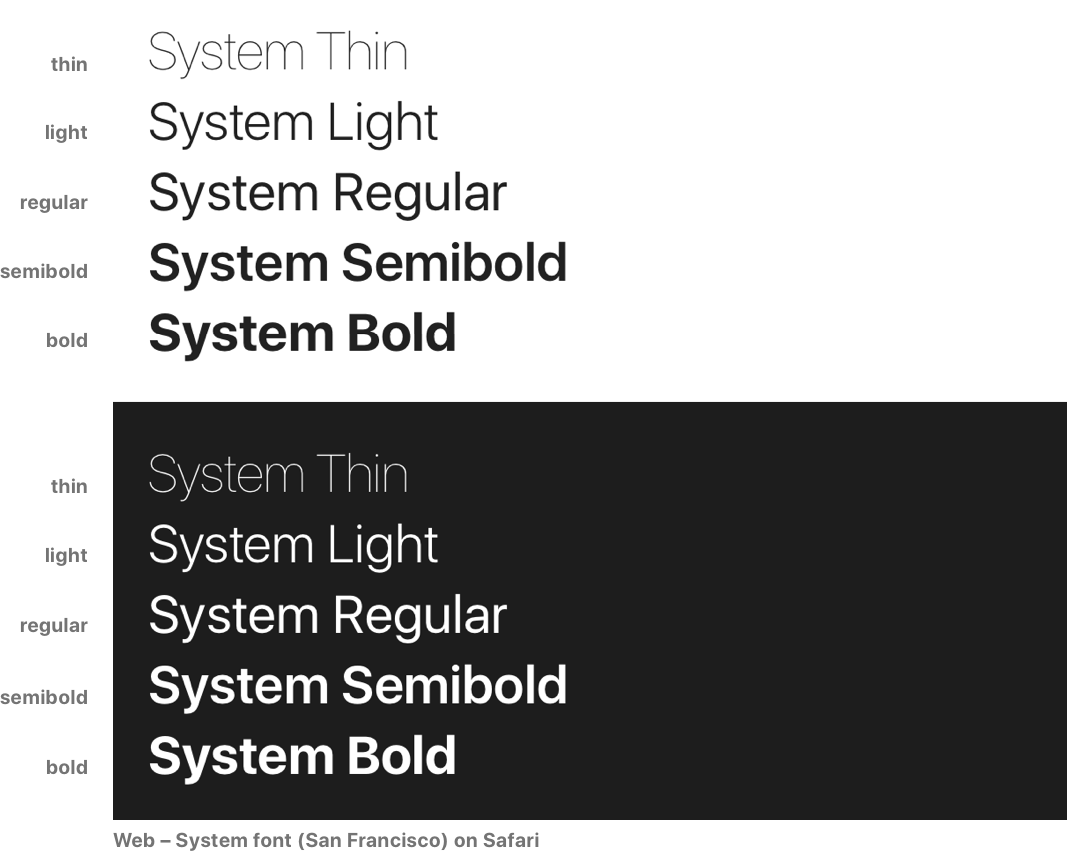 These weights are only intended for iOS, as they directly reference the native San Francisco typeface. 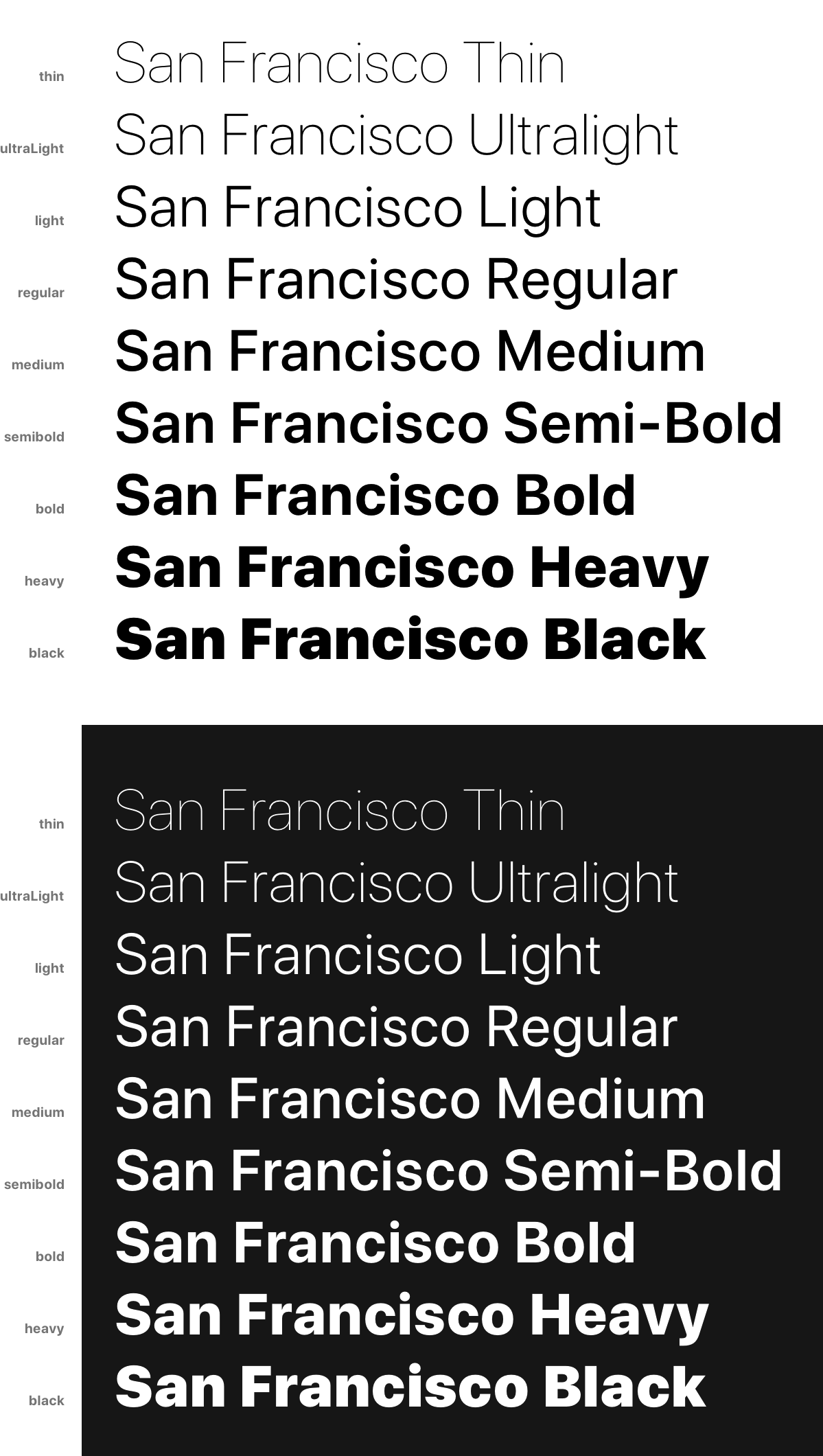 These weights are only intended for Android, as they directly reference the native Roboto typeface. 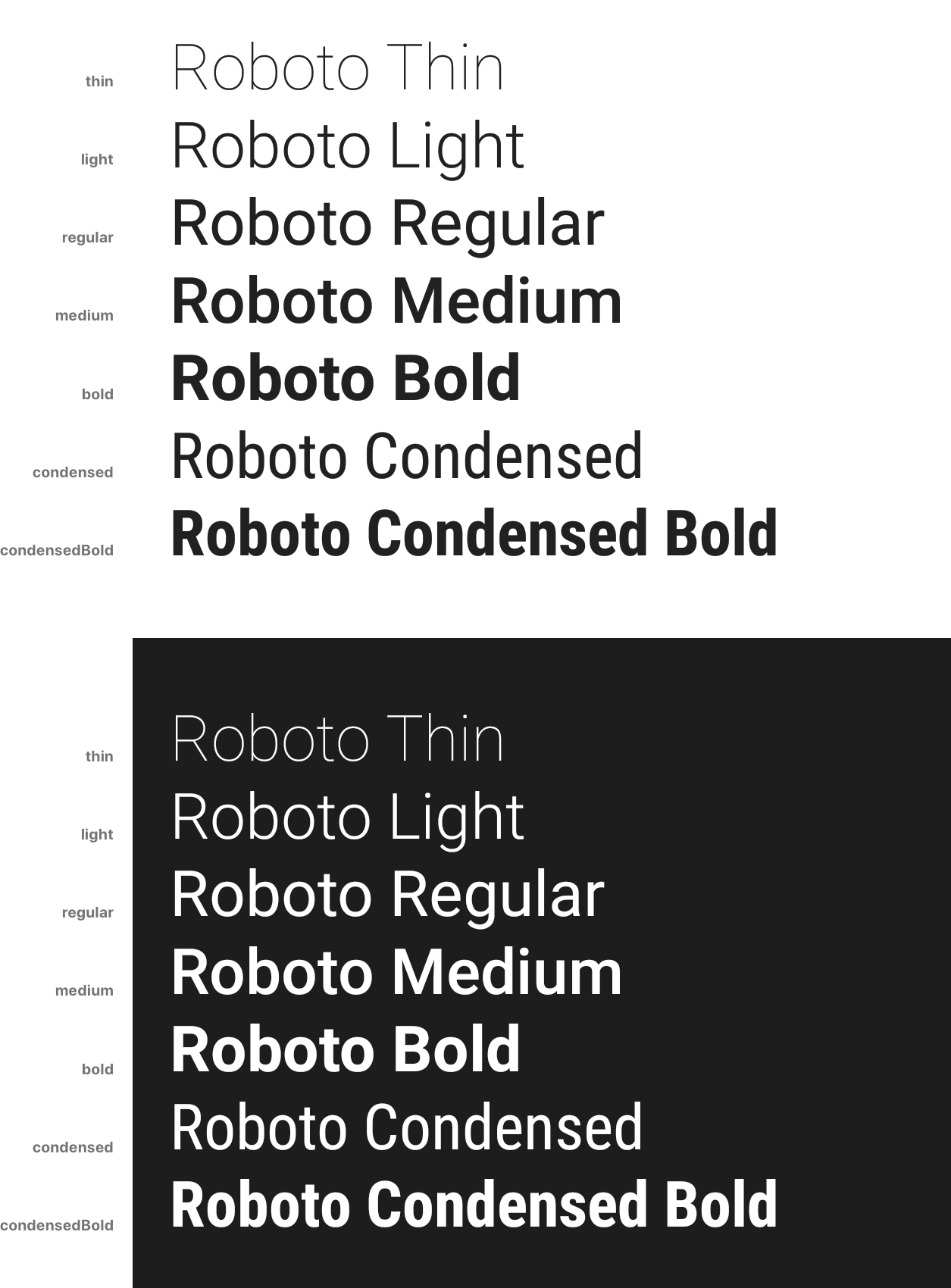 These weights are only intended for the web, and render react-native-web's system font stack. 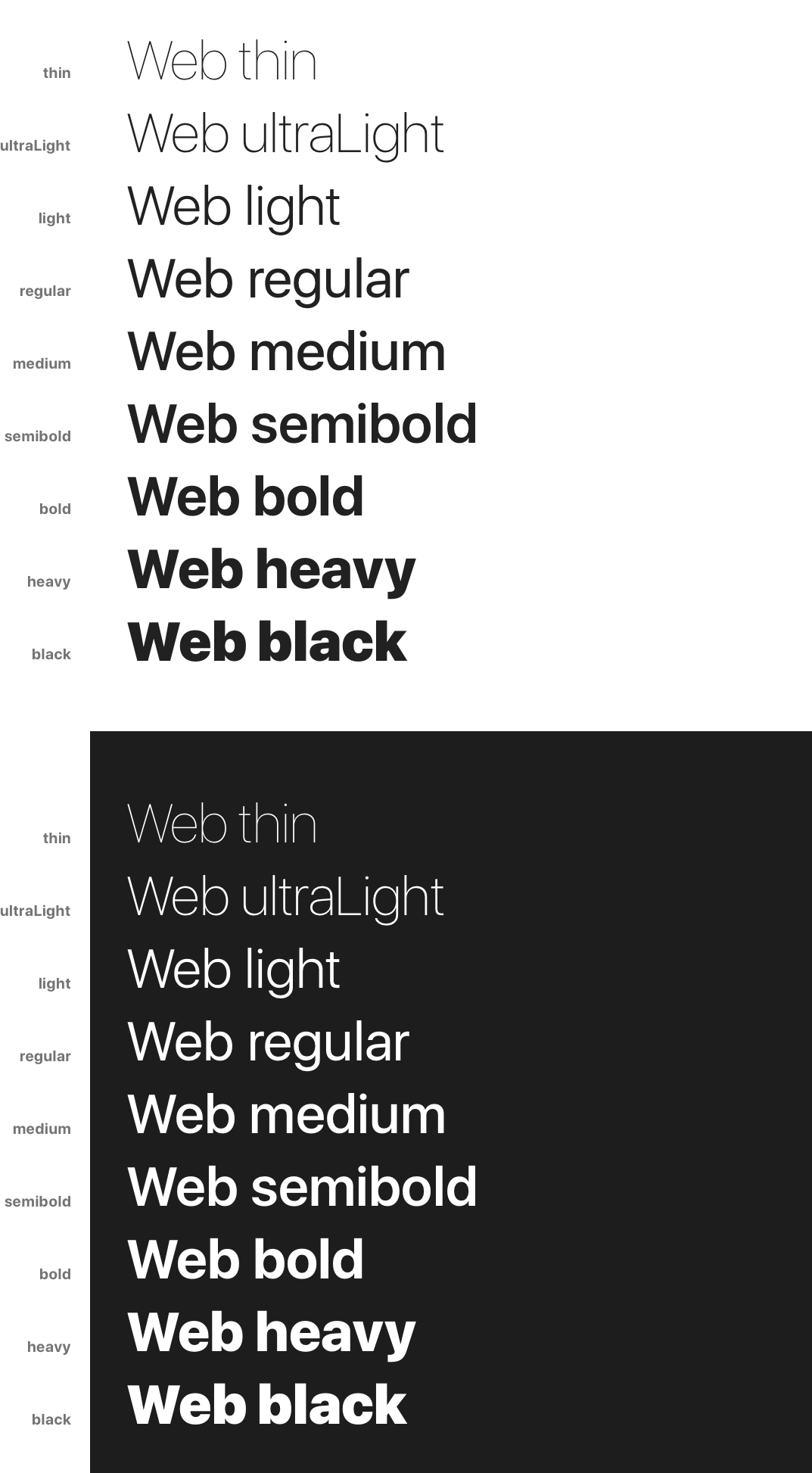 We also include the default text color hex values for each platform. 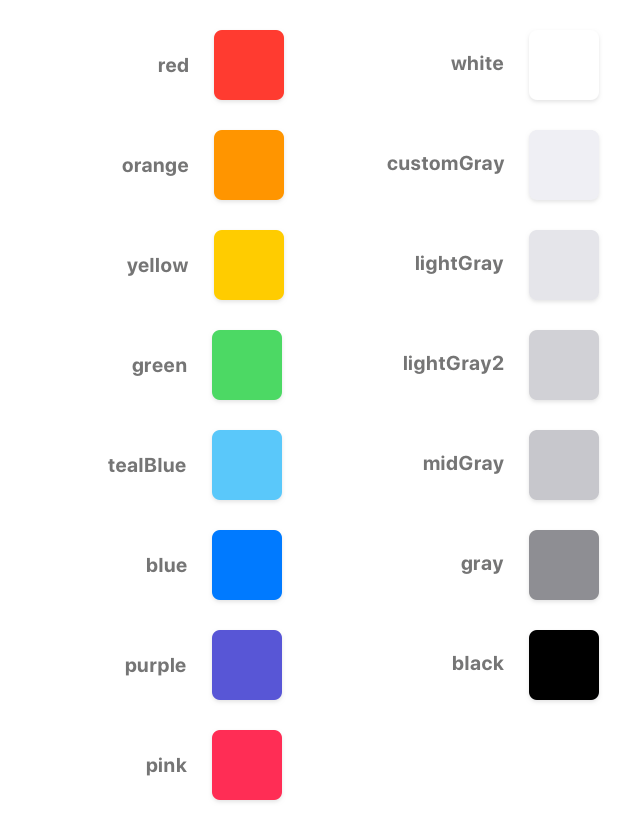 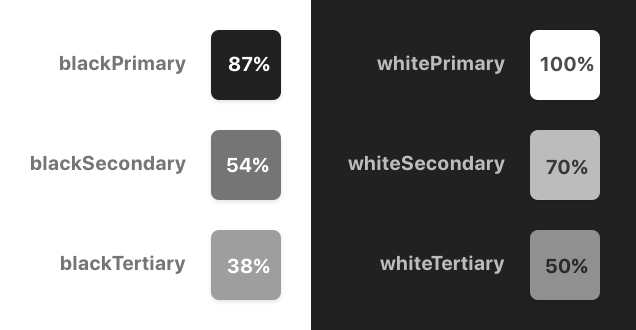 The San Francisco typeface defines its letter spacing via Kerning. This is not compatible with the React Native text style properties, as they take letter-spacing instead.

To perform this conversion on iOS you can use the sanFranciscoSpacing function, which receives the font size and returns the appropriate letter spacing.

This is not needed for the web as the browsers already take care of this.

This is already taken care of on the collections, but if you want to define your own sizes you can adjust the spacing on iOS with this helper.

This is the approach that we like to follow, and all the collections exported from this library render nicely on all the supported platforms with their respective native typefaces, for that we use the System weight helper.

You can check the code of the example app where we included a couple of screens that follow this philosophy, this is how they render on iOS and Android: 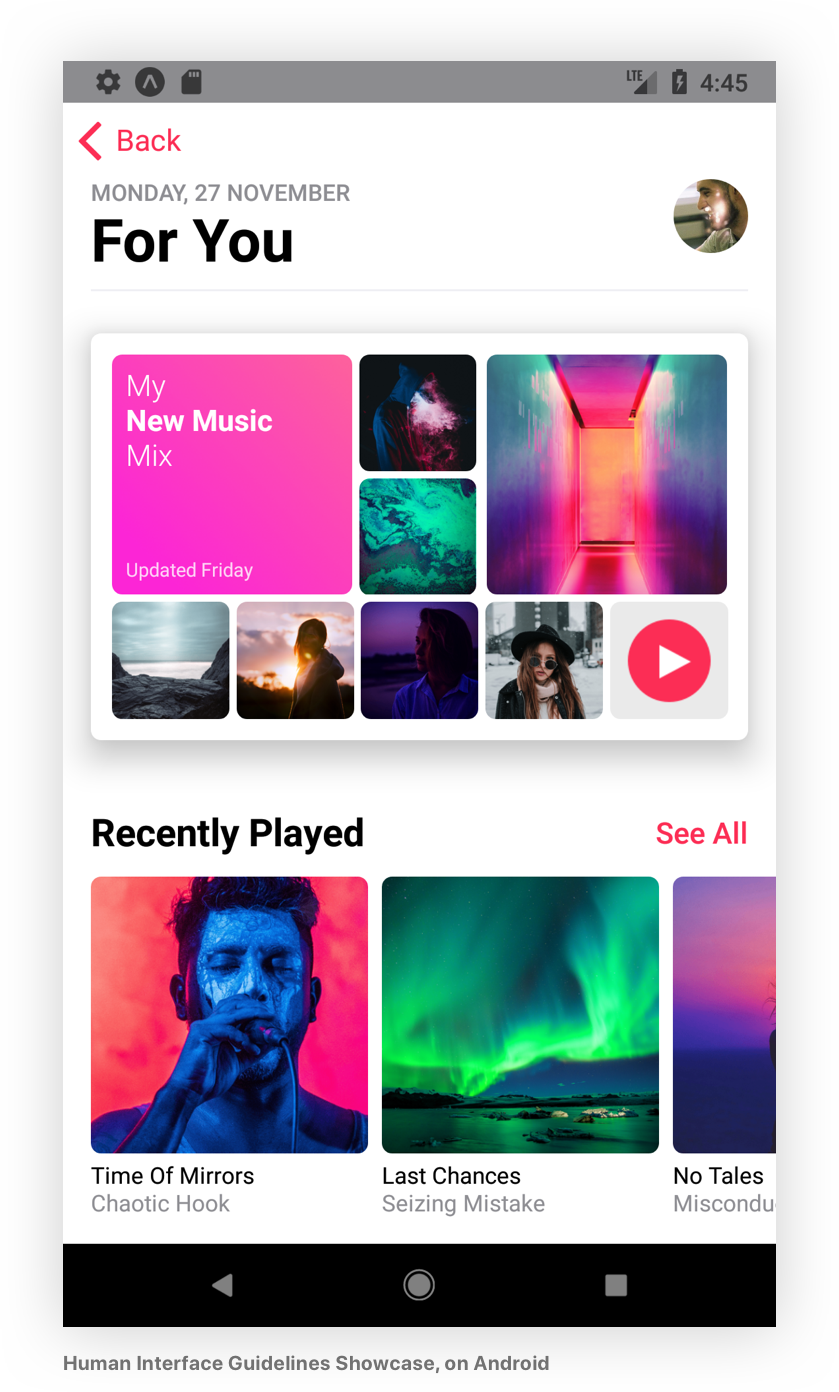 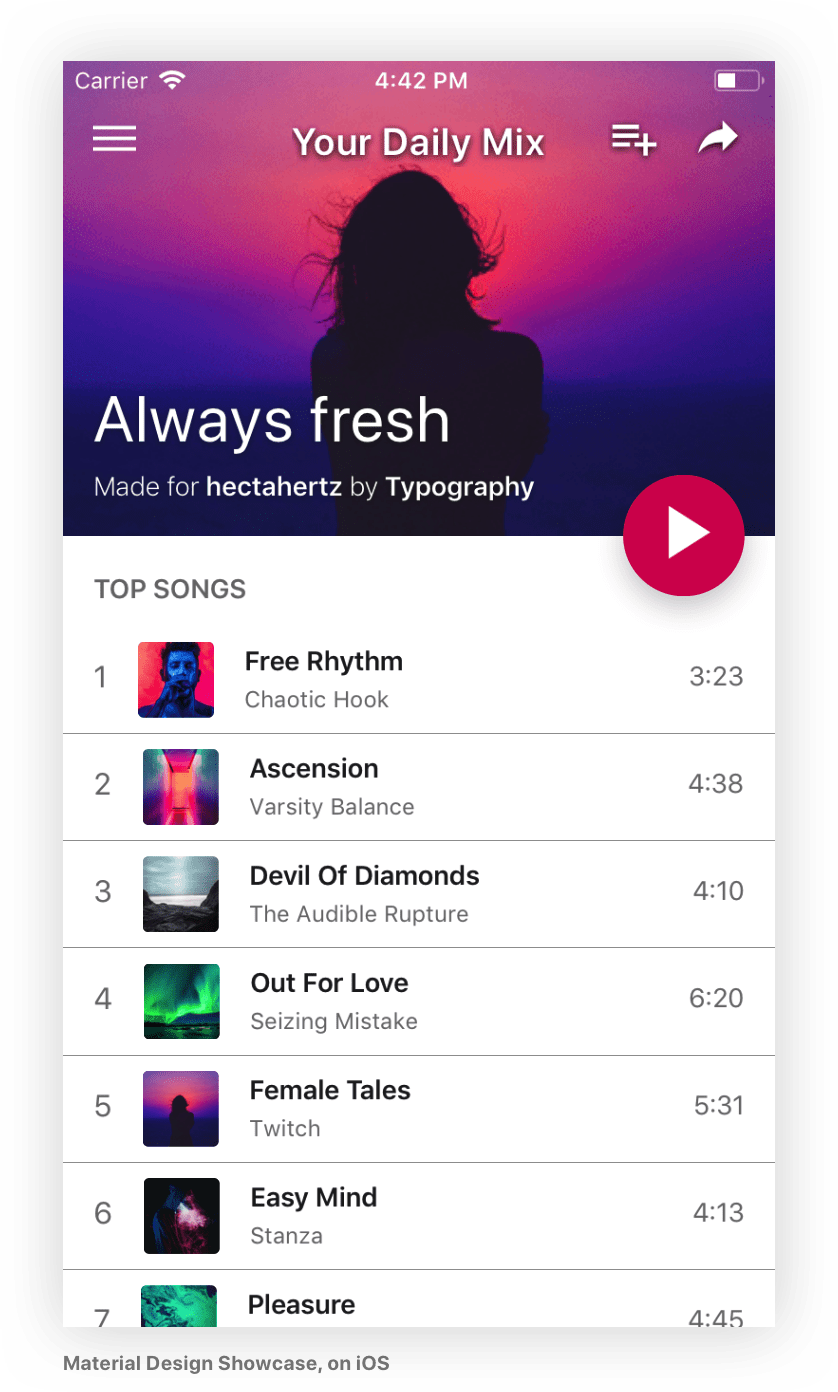 But I don't wanna use the Material Design or Human Interface Guidelines! Is there any reason why I should use this library?

Absolutely! The helpers are very convenient to build your own text styles as they work around the quirks of working with text styles on React Native, even if you want to specify your own sizes and weights, check them out!

There's no support for letter spacing on React Native Android yet. ☹️

Where is Roboto Black?

It's not available by default on React Native Android yet. 😐

Why are there less weights available for CJK(Chinese, Japanese, Korean) languages on Android than iOS?

Android uses Noto Sans CJK (also known as Source Han Sans) to render those languages, and even though it has seven weights, they're not shipped with Android. 😕

There are some issues tracking this already, hopefully they will be included in the future.

Of course! There are some examples in the provided app, check the code!

Why is this library exporting StyleSheets and objects instead of components?

The idea behind it is that textStyles are the universally accepted way of styling text and this makes integration with many libraries easier.

The StyleSheet/Object pattern is already being used in the React Native codebase to provide an easy way to extend exported StyleSheets.

If you enjoy using pre-styled components for your text, you can easily define them and just supply the desired styles from this library! 🙂

We use SemVer for versioning. For the versions available, see the tags in this repository.

See also the list of contributors who participated in this project.

Pictures for the demo app by: