This package reimagines Paredit - a popular method to navigate and edit LISP code in Emacs.

The killer-feature are the short bindings:

Most of more than 100 interactive commands that lispy provides are bound to a-z and A-Z in lispy-mode. You can see the full command reference with many examples here.

The price for these short bindings is that they are only active when:

The advantage of short bindings is that you are more likely to use them. As you use them more, you learn how to combine them, increasing your editing efficiency.

To further facilitate building complex commands from smaller commands, lispy-mode binds digit-argument to 0-9. For example, you can mark the third element of the list with 3m. You can then mark third through fifth element (three total) with 2> or >>. You can then move the selection to the last three elements of the list with 99j.

If you are currently using Paredit, note that lispy-mode and paredit-mode can actually coexist with very few conflicts, although there would be some redundancy.

The key binding method is influenced by vi, although this isn't modal editing per se.

Here's a quote from Wikipedia on how vi works, in case you don't know:

Here's an illustration of Emacs, vi and lispy bindings for inserting a char and calling a command:

Of course it's not magic, lispy needs to have normal/insert mode to perform both functions with j. The difference from vi is that the mode is explicit instead of implicit - it's determined by the point position or the region state:

So people who generally like Emacs bindings (like me) can have the cake and eat it too (no dedicated insert mode + shorter key bindings). While people who like vi can still get an experience that's reasonably close to vi for LISP editing (since vi's line-based approach isn't very appropriate for LISP anyway).

But if you ask:

What if I want to insert when the point is before/after paren or the region is active?

The answer is that because of the LISP syntax you don't want to write this:

Also, Emacs does nothing special by default when the region is active and you press a normal key, so new commands can be called in that situation.

Most functions are cataloged and described at http://abo-abo.github.io/lispy/.

It's easiest/recommended to install from MELPA. Here's a minimal MELPA configuration for your ~/.emacs:

Afterwards, M-x package-install RET lispy RET (you might want to M-x package-refresh-contents RET beforehand if you haven't done so recently).

After installing, you can call M-x lispy-mode for any buffer with a LISP dialect source. To have lispy-mode activated automatically, use something like this:

Although I prefer to eval things in *scratch*, sometimes M-: - eval-expression is handy. Here's how to use lispy in the minibuffer during eval-expression:

If you want to replace some of the lispy-mode's bindings you can do it like this:

Compatibility with other modes

Use the lispy-compat variable to enable compatibility with modes that could otherwise conflict. These currently include:

The default setting only enables compatibility with edebug.

How to get into list-editing mode (special)

The plain keys will call commands when:

When one of the first two conditions is true, I say that the point is special. When the point is special, it's very clear to which sexp the list-manipulating command will be applied to, what the result be and where the point should end up afterwards. You can enhance this effect with show-paren-mode or similar.

Here's an illustration to this effect, with lispy-clone (here, | represents the point):

You can use plain Emacs navigation commands to get into special, or you can use some of the dedicated commands:

These are the few lispy commands that don't care whether the point is special or not. Other such bindings are DEL, C-d, C-k.

Special is useful for manipulating/navigating lists. If you want to manipulate symbols, use region selection instead.

When special, the digit keys call digit-argument which is very useful since most lispy commands accept a numeric argument. For instance, 3c is equivalent to ccc (clone sexp 3 times), and 4j is equivalent to jjjj (move point 4 sexps down).

Some useful applications are 9l and 9h - they exit list forwards and backwards respectively at most 9 times which makes them effectively equivalent to end-of-defun and beginning-of-defun. Or you can move to the last sexp of the file with 999j.

How to get out of special

To get out of the special position, you can use any of the good-old navigational commands such as C-f or C-n. Additionally SPC will break out of special to get around the situation when you have the point between the open parens like this

and want to start inserting; SPC will change the code to this:

A lot of Lispy commands come in pairs - one reverses the other:

These commands handle whitespace in addition to inserting the expected thing.

Most special commands will leave the point special after they're done. This allows to chain them as well as apply them continuously by holding the key. Some useful hold-able keys are jkf<>cws;. Not so useful, but fun is /: start it from |( position and hold until all your Lisp code is turned into Python :).

a - lispy-ace-symbol will let you select which symbol to mark within current form. This can be followed up with e.g. eval, describe, follow, raise etc. Or you can simply m to deactivate the mark and edit from there.

- - lispy-ace-subword is a niche command for a neat combo. Start with:

Fill end to finish the statement.

Sometimes the expression that you want to operate on isn't bounded by parens. In that case you can mark it with a region and operate on that.

While not in special:

The arrow keys j/k will move the region up/down within the current list. The actual code will not be changed.

Switch to the other side of the region

Use d - lispy-different to switch between different sides of the region. The side is important since the grow/shrink operations apply to current side of the region.

Use a combination of:

The other two arrow keys will mark the parent list of the current region:

To do the reverse of the previous operation, i.e. to mark the first child of marked list, use i - lispy-tab.

Commands that operate on region

These features are specific to the Lisp dialect used. Currently Elisp and Clojure (via cider) are supported. There's also basic evaluation support for:

Bound to C-1. Show the doc for the current function inline.

C-h f is fine, but the extra buffer, and having to navigate to a symbol is tiresome. C-1 toggles on/off the inline doc for current function. No extra buffer necessary:

Here's how it looks for Clojure:

eldoc-mode is cool, but it shows you arguments over there and you're writing over here!. No problem, C-2 fixes that:

As you see, normal, &optional and &rest arguments have each a different face. Here's how it looks for Clojure:

Use completion to select a symbol to jump to from all top-level symbols in the in current directory.

Works out of the box for Elisp, Scheme and Common Lisp. clojure-semantic is required for Clojure.

There's a feature similar to ipython-notebook. Evaluating an Emacs outline will evaluate all of the outline's code and echo the result of the last expression. When an outline ends with a colon (:), the result will instead be inserted into the buffer. If the evaluation result changes for whatever reason, it will be replaced after each subsequent e.

Python, Clojure, and Julia currently have a slightly better notebook support, pressing e on the parent outline will evaluate all the children outlines sequentially. This allows to arrange scripts hierarchically, with relatively few top-level outlines and relatively many total outlines. Each outline's output can be examined by adding a : to the title of the outline.

The following example shows a buffer before and after pressing e. 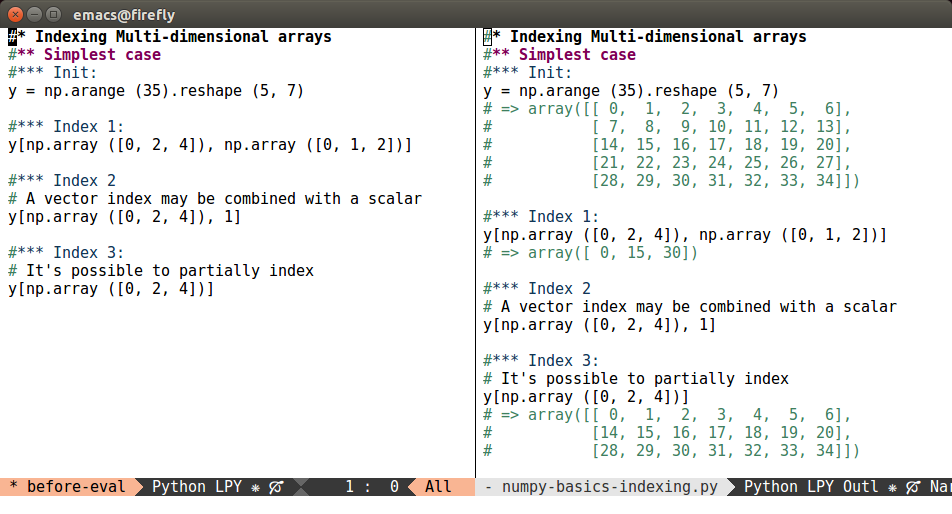 There is one top-level outline, with one level-2 child, which in turn has a four level-3 children. Three of these children end in :, so their output will be updated after the eval.

Demo 3: Down the rabbit hole