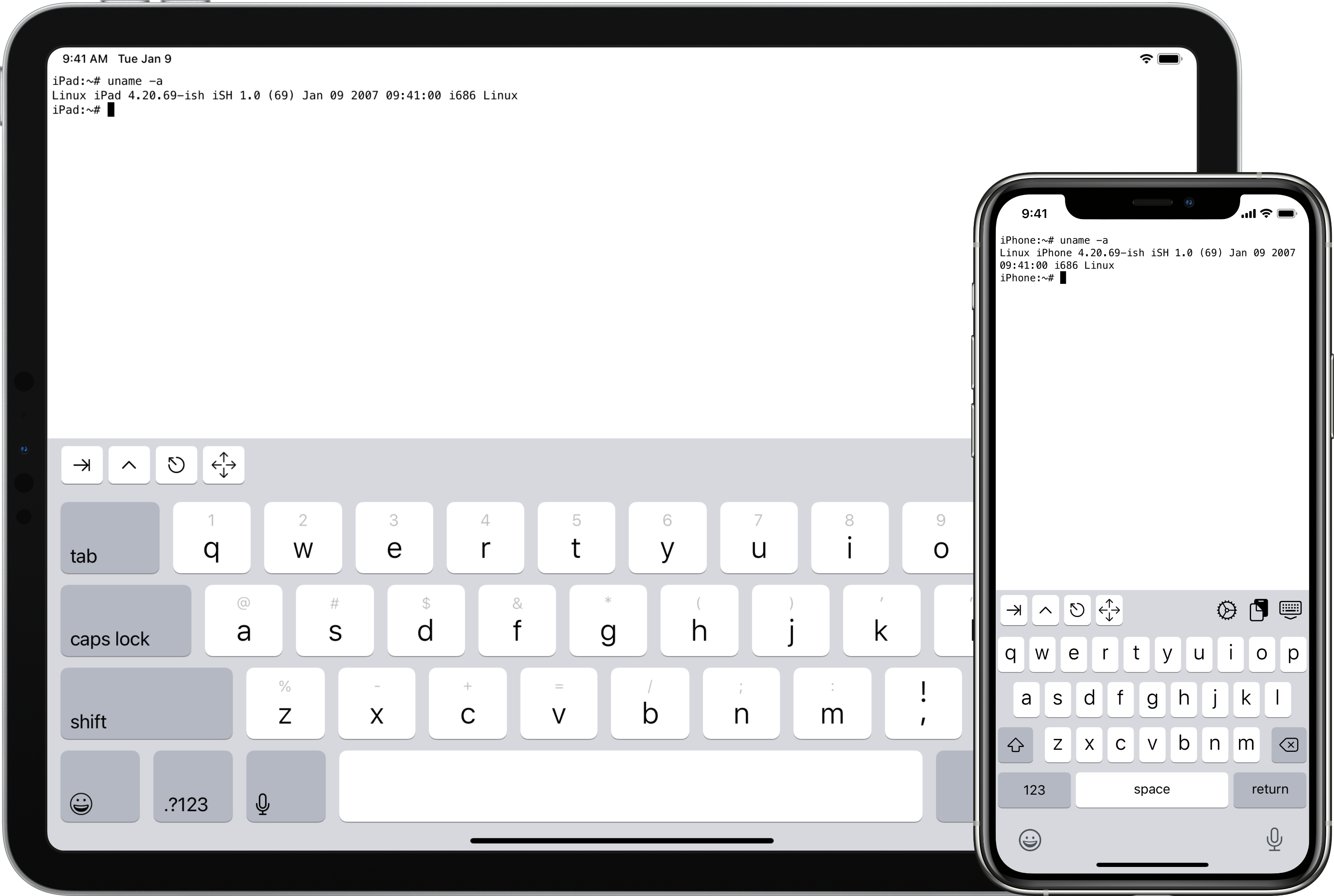 A project to get a Linux shell running on iOS, using usermode x86 emulation and syscall translation.

For the current status of the project, check the issues tab, and the commit logs.

This project has a git submodule, make sure to clone with --recurse-submodules or run git submodule update --init after cloning.

You'll need these things to build the project:

Open the project in Xcode, open iSH.xcconfig, and change ROOT_BUNDLE_IDENTIFIER to something unique. You'll also need to update the development team ID in the project (not target!) build settings. Then click Run. There are scripts that should do everything else automatically. If you run into any problems, open an issue and I'll try to help.

To set up a self-contained Alpine linux filesystem, download the Alpine minirootfs tarball for i386 from the Alpine website and run ./tools/fakefsify, with the minirootfs tarball as the first argument and the name of the output directory as the second argument. Then you can run things inside the Alpine filesystem with ./ish -f alpine /bin/login -f root, assuming the output directory is called alpine. If tools/fakefsify doesn't exist for you in your build directory, that might be because it couldn't find libarchive on your system (see above for ways to install it.)

You can replace ish with tools/ptraceomatic to run the program in a real process and single step and compare the registers at each step. I use it for debugging. Requires 64-bit Linux 4.11 or later.

iSH has several logging channels which can be enabled at build time. By default, all of them are disabled. To enable them:

A note on the JIT

Possibly the most interesting thing I wrote as part of iSH is the JIT. It's not actually a JIT since it doesn't target machine code. Instead it generates an array of pointers to functions called gadgets, and each gadget ends with a tailcall to the next function; like the threaded code technique used by some Forth interpreters. The result is a speedup of roughly 3-5x compared to pure emulation.

Unfortunately, I made the decision to write nearly all of the gadgets in assembly language. This was probably a good decision with regards to performance (though I'll never know for sure), but a horrible decision with regards to readability, maintainability, and my sanity. The amount of bullshit I've had to put up with from the compiler/assembler/linker is insane. It's like there's a demon in there that makes sure my code is sufficiently deformed, and if not, makes up stupid reasons why it shouldn't compile. In order to stay sane while writing this code, I've had to ignore best practices in code structure and naming. You'll find macros and variables with such descriptive names as ss and s and a. Assembler macros nested beyond belief. And to top it off, there are almost no comments.

So a warning: Long-term exposure to this code may cause loss of sanity, nightmares about GAS macros and linker errors, or any number of other debilitating side effects. This code is known to the State of California to cause cancer, birth defects, and reproductive harm.