GANTheftAuto is a fork of the Nvidia's GameGAN, which is research focused on emulating dynamic game environments. The early research done with GameGAN was with games like Pacman, and we aimed to try to emulate one of the most complex environments in games to date with Grand Theft Auto 5. 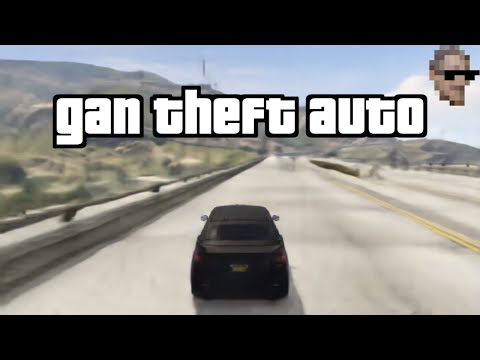 GANTheftAuto focuses mainly on the Grand Theft Auto 5 (GTA5) game, but contains other environments as well. In addition to the original project, we provide a set of improvements and fixes, with the most important ones being:

The work is still in progress as we know that our results can be greatly improved still.

GANTheftAuto output on the left, upscaled 4x for better visibility, and upsampled output (by a separate model)

You can instantly run the demo:

(you need a CUDA capable Nvidia GPU to run this demo)

We are providing one of our trained models on GTA5 data as well as an 8x upsample model (part of a separate project). There's no GTA V running, this is the actual GAN output of a human playing within the GAN environment.

(you need a CUDA capable Nvidia GPU to run this demo)

Since we cannot share out data collecting script, which involves a GTA5 mod and python code, we are sharing a sample dataset which you can use to train your model on. It's included within the data/gtav/gtagan_2_sample folder.

To train your own model, follow the steps above, but run a training script instead.

You'll need a GPU with at least 8 GB of VRAM.

Batch size in the demo scripts is currently set to 1. If you have 16 GB of VRAM or more, try to find the biggest batch that you can fit in your GPU(s).

(you need a CUDA capable Nvidia GPU to run this code, but we are open for contribution to make it running on AMD GPUs as well)

Currently, GTA V, Vroom and Cartpole are the only implemented data sources.

This is an environment created using Grand Theft Auto V. We created our own GTA5 mod accompanied by a Python script to collect the data. It contains a simple driving AI (which we named DumbAI ;) ). We are pulling road nodes from the game and apply math transformations to create paths, then we are spawning multiple cars at the same time and alternate them to pull multiple streams at the same time (to speedup training). Game mod accepts steering commands from the Python script as well as limits the speed and sets other options like weather, traffic, etc. Python script analyzes current car position and nearest road nodes to drive using different paths to cover all possible actions and car positions as best as possible. This is important for further seamless experience with player "playing" the environment - it needs to output coherent and believable images. 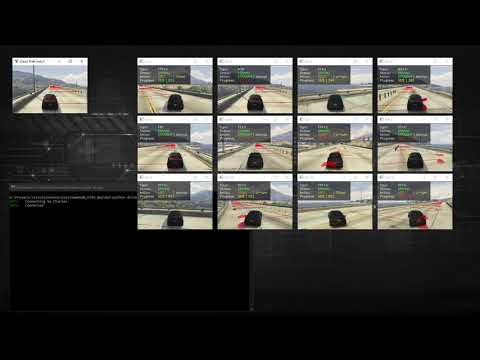 As mentioned above, we can't share our data collecting scripts, but we are providing sample dataset. If you believe you have a model that has interesting results, feel free to reach out and we may try to train it on the full dataset.

You can also create your own dataset by recording frames and actions at 10 FPS. Save format is gzipped pickle file containing a dictionary of 'actions' and 'observations'. Actions are a single-dimensional NumPy array of 0 (left), 1 (straight) and 2 (right), while observations are a four-dimensional array where the first dimension are samples, and the other are (48, 80, 3) - RGB image size. Ungzip and unpickle example sample from the sample dataset to learn more about the data structure. Each file should contain a single sequence length of at least 32 frames.

Example train script is available at scripts/gtav_multi.sh (as well as its .bat version).

Vroom is our own environment based on the OpenmAI Gym's Box2D CarRacing environment, but this one does not require Gym to run. Its only dependencies are OpenCV and NumPy.

Example track with a slice of what's actually saved as a training data:

(blue, red and purple lines are shown for visualization purposes only and are not a part of the training data)

We are including the data collecting script - a simple AI (DumbAI) is playing the environment to collect the data. The car is "instructed" to follow the road, with additional constantly changing offset from the center of teh road, turns and u-turns to cover all possible scenarios.

To run the data collector:

This environment is created with OpenAI Gym's Cartpole. However, the data collecting part is unattended as we are first training the NEAT algoritm to play it, then collect data generated this way.

Warning: recently we've discovered a possible issue with this environment causing actions to alternate between a direction and no action. As for now we have no fix for this environment, so your model results are highly likely to not be very useful. We'd recommend trying to build your own agent to play cartpole instead of a NEAT bot.

To run the data collector:

We provide training scripts in './scripts'.

Inference is currently unfinished - can be ran, but actions are randomly generated instead of taken from the user input. We'll finish it up shortly.

Edit scripts/gtav_inference.sh and update the model filename, then run:

Edit scripts/cartpole_inference.sh and update the model filename, then run:

Edit scripts/cartpole_inference.sh and update the model filename, then run:

(head to the GameGAN for a full version)

Please clone and follow https://github.com/hardmaru/WorldModelsExperiments/tree/master/doomrnn to install the VizDoom environment.

For custom datasets, you can construct .npy files that contain a sequence of image and action pairs and define a dataloader similar to 'class vizdoom_dataset'. Please refer to 'data/dataloder.py'.

-- The above repository is deprecated and VizDoom environment might not run correctly in certain systems. In that case, you can use the docker installtaion of https://github.com/zacwellmer/WorldModels and copy the extraction scripts in the docker environment.

We provide training scripts in './scripts'.