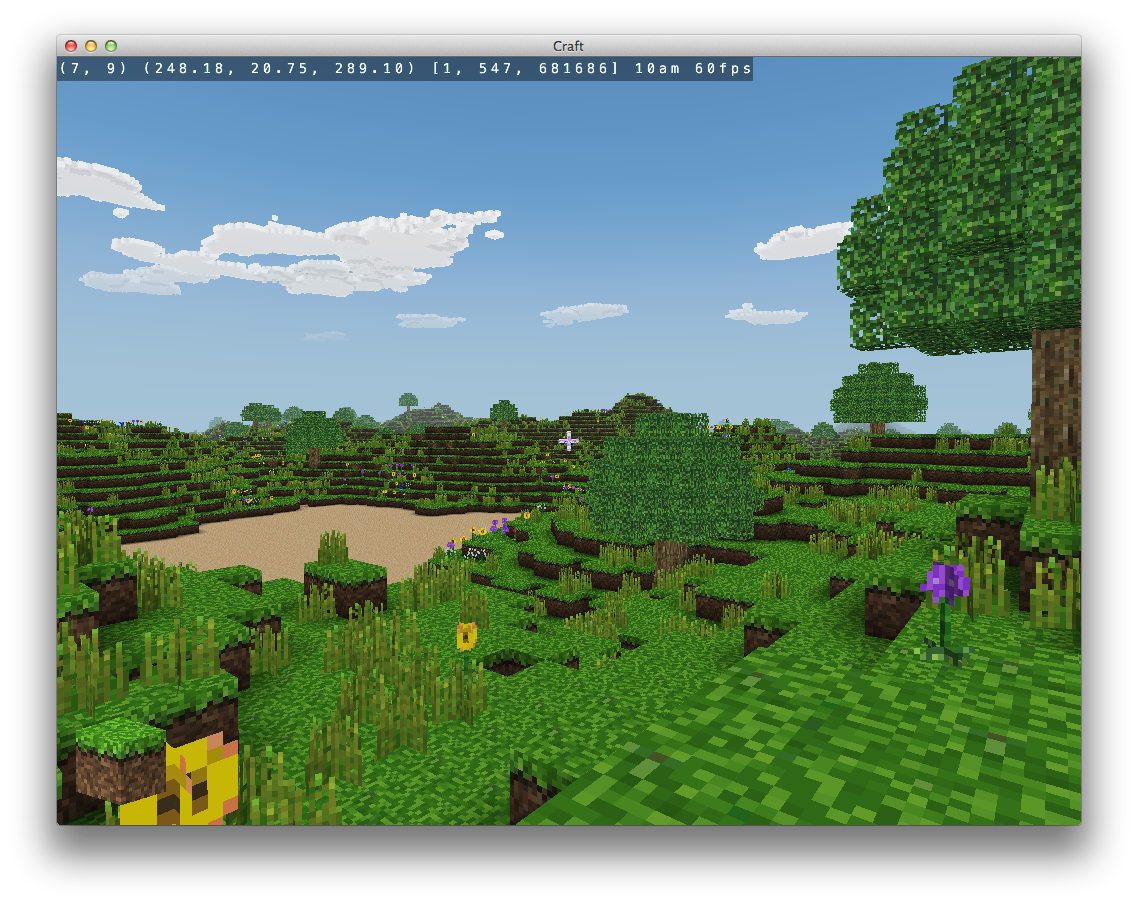 Mac and Windows binaries are available on the website.

See below to run from source.

Download and install CMake if you don't already have it. You may use Homebrew to simplify the installation:

Download and install CMake and MinGW. Add C:\MinGW\bin to your PATH.

Download and install cURL so that CURL/lib and CURL/include are in your Program Files directory.

Use the following commands in place of the ones described in the next section.

Once you have the dependencies (see above), run the following commands in your terminal.

After many years, craft.michaelfogleman.com has been taken down. See the Server section for info on self-hosting.

You can connect to a server with command line arguments...

Or, with the "/online" command in the game itself.

You can run your own server or connect to mine. The server is written in Python but requires a compiled DLL so it can perform the terrain generation just like the client.

Teleport to another user. If NAME is unspecified, a random user is chosen.

Switch to another registered username. The login server will be re-contacted. The username is case-sensitive.

Unauthenticate and become a guest user. Automatic logins will not occur again until the /login command is re-issued.

Switch to offline mode. FILE specifies the save file to use and defaults to "craft".

Connect to the specified server.

Teleport to the specified chunk.

Teleport back to the spawn point. 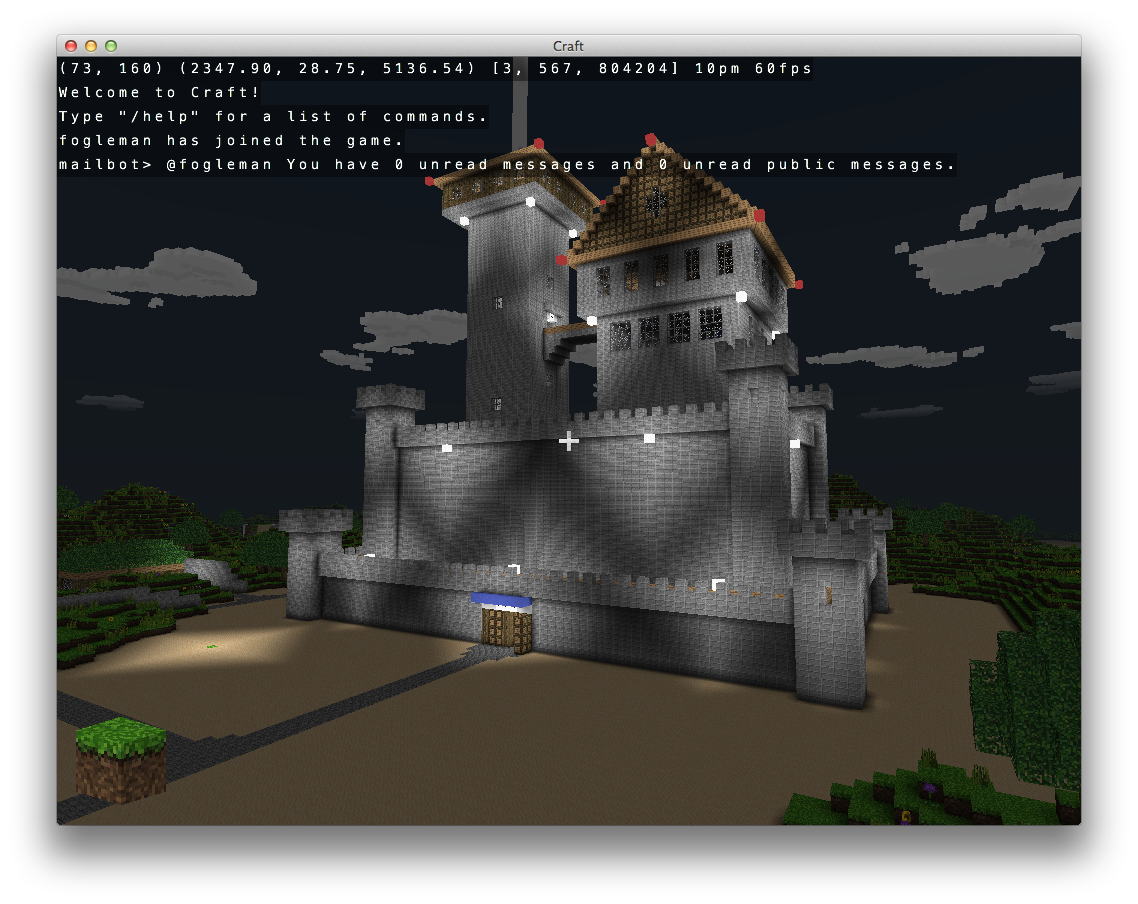 The terrain is generated using Simplex noise - a deterministic noise function seeded based on position. So the world will always be generated the same way in a given location.

The world is split up into 32x32 block chunks in the XZ plane (Y is up). This allows the world to be “infinite” (floating point precision is currently a problem at large X or Z values) and also makes it easier to manage the data. Only visible chunks need to be queried from the database.

Only exposed faces are rendered. This is an important optimization as the vast majority of blocks are either completely hidden or are only exposing one or two faces. Each chunk records a one-block width overlap for each neighboring chunk so it knows which blocks along its perimeter are exposed.

Only visible chunks are rendered. A naive frustum-culling approach is used to test if a chunk is in the camera’s view. If it is not, it is not rendered. This results in a pretty decent performance improvement as well.

Chunk buffers are completely regenerated when a block is changed in that chunk, instead of trying to update the VBO.

Text is rendered using a bitmap atlas. Each character is rendered onto two triangles forming a 2D rectangle.

“Modern” OpenGL is used - no deprecated, fixed-function pipeline functions are used. Vertex buffer objects are used for position, normal and texture coordinates. Vertex and fragment shaders are used for rendering. Matrix manipulation functions are in matrix.c for translation, rotation, perspective, orthographic, etc. matrices. The 3D models are made up of very simple primitives - mostly cubes and rectangles. These models are generated in code in cube.c.

Transparency in glass blocks and plants (plants don’t take up the full rectangular shape of their triangle primitives) is implemented by discarding magenta-colored pixels in the fragment shader.

User changes to the world are stored in a sqlite database. Only the delta is stored, so the default world is generated and then the user changes are applied on top when loading.

The y-position of blocks are limited to 0 <= y < 256. The upper limit is mainly an artificial limitation to prevent users from building unnecessarily tall structures. Users are not allowed to destroy blocks at y = 0 to avoid falling underneath the world.

Multiplayer mode is implemented using plain-old sockets. A simple, ASCII, line-based protocol is used. Each line is made up of a command code and zero or more comma-separated arguments. The client requests chunks from the server with a simple command: C,p,q,key. “C” means “Chunk” and (p, q) identifies the chunk. The key is used for caching - the server will only send block updates that have been performed since the client last asked for that chunk. Block updates (in realtime or as part of a chunk request) are sent to the client in the format: B,p,q,x,y,z,w. After sending all of the blocks for a requested chunk, the server will send an updated cache key in the format: K,p,q,key. The client will store this key and use it the next time it needs to ask for that chunk. Player positions are sent in the format: P,pid,x,y,z,rx,ry. The pid is the player ID and the rx and ry values indicate the player’s rotation in two different axes. The client interpolates player positions from the past two position updates for smoother animation. The client sends its position to the server at most every 0.1 seconds (less if not moving).

Client-side caching to the sqlite database can be performance intensive when connecting to a server for the first time. For this reason, sqlite writes are performed on a background thread. All writes occur in a transaction for performance. The transaction is committed every 5 seconds as opposed to some logical amount of work completed. A ring / circular buffer is used as a queue for what data is to be written to the database.

In multiplayer mode, players can observe one another in the main view or in a picture-in-picture view. Implementation of the PnP was surprisingly simple - just change the viewport and render the scene again from the other player’s point of view.

Hit testing (what block the user is pointing at) is implemented by scanning a ray from the player’s position outward, following their sight vector. This is not a precise method, so the step rate can be made smaller to be more accurate.

Collision testing simply adjusts the player’s position to remain a certain distance away from any adjacent blocks that are obstacles. (Clouds and plants are not marked as obstacles, so you pass right through them.)

A textured sky dome is used for the sky. The X-coordinate of the texture represents time of day. The Y-values map from the bottom of the sky sphere to the top of the sky sphere. The player is always in the center of the sphere. The fragment shaders for the blocks also sample the sky texture to determine the appropriate fog color to blend with based on the block’s position relative to the backing sky.

Ambient occlusion is implemented as described on this page: